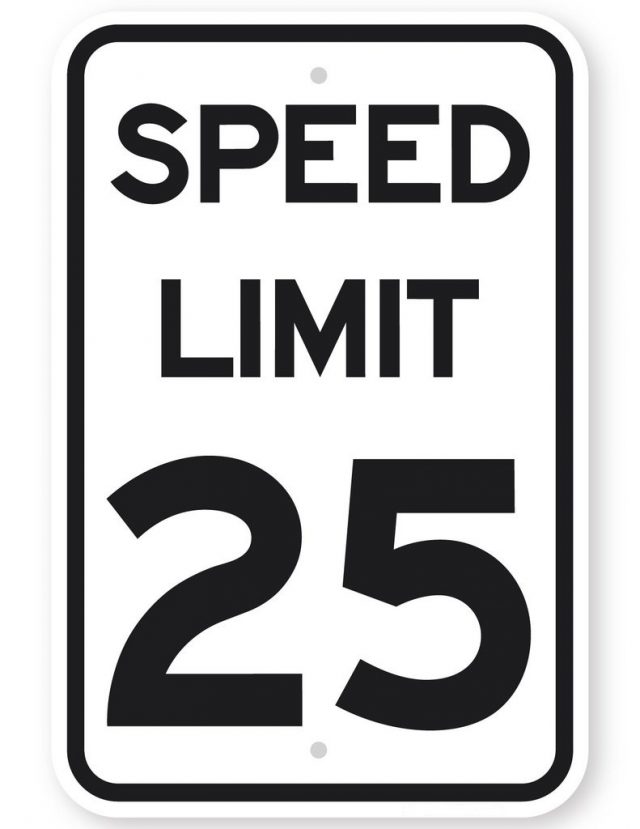 Drivers will soon have to slow down as they navigate Brookline’s roads.

In October 2017, the Transportation Board voted in favor of establishing a new statutory speed limit at 25 miles per hour – down from the 30 miles per hour.

Though the board voted in October, the new speed limit is not enforceable until the town posts the new signs. Those signs arrived in mid-February, and so long as the ground does not freeze, crews will be able to install the signs in the coming weeks, according to Transportation Administrator Todd Kirrane.

Once the signs are up, the speed limit in town will be 25 miles per hour unless otherwise posted.

The town ordered 57 signs at $76.64 each. According to Kirrane, the signs are the state standard. They will go up at all town entryways.

According to Kirrane, Town Meeting accepted the change during annual Town Meeting in May 2017. The Transportation Board followed up with a public hearing in September and the vote to establish the new speed limit in October.

During the October public hearing some members of the public questioned whether establishing a lower statutory speed limit would be effective in enhancing safety.

“It’s just another tool that we can use along with other traffic calming policing,” Kirrane said.

Reducing the speed limit is part of larger town efforts to work on initiatives like complete streets, according to Kirrane.

Every time a street, like Babcock Street, is up for re-paving, the town first studies the street to see if and where traffic calming features could be added or improved.

“Instead of a street being paved it goes through that internal process [first],” said Kirrane.

So far, Kirrane said the conditions on the roads are getting safer.

“We are noticing a reduction in the speeds on streets with the traffic calming that we’re doing,” said Kirrane. “The feedback that we’re getting from residents is the perception or feeling on the road is safer.”