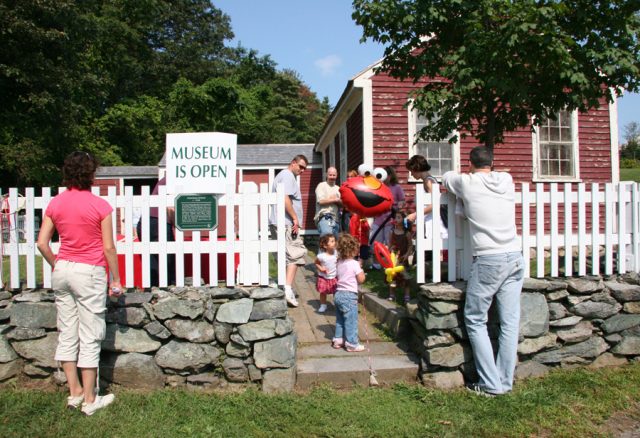 Brookline, Massachusetts proudly boasts of owning a school house that is over two hundred years old. It is the Putterham School which was built in 1768 at the juncture of Grove and Newton Streets (1897 atlas). In April of 1966 the school was moved from its original site on Grove Street to its present location at Larz Anderson Park. The actual move and plans for the building’s restoration were conducted under the direction of Race Architectural Restoration Enterprises, Inc. (R.A.R.E., Inc.). The Brookline Board of Selectmen and the Brookline Historical Society worked together for several years to accomplish the move. The Historical Society has in its possession a complete photographic and narrative history of the school, prepared for it by R.A.R.E., Inc.

Of unusual interest in the building was a portion of plaster painted black on which a “number work lesson” had been written with white chalk by Miss Mary Elizabeth Hyde, for many years the teacher at Putterham School, and dated “Monday/October 18; 1897.” This was revealed when many layers of repair cloth had been removed from the walls. Miss Hyde’s handiwork is now preserved and protected by a glass covering.

The building, after being moved, was reset on a solid fieldstone foundation. Antique glass was found for the windows. Some structural repairs were made where deterioration and erosion made the building unsafe. The shade of red used to paint the exterior conforms to the color applied originally as revealed by paint scrapings. 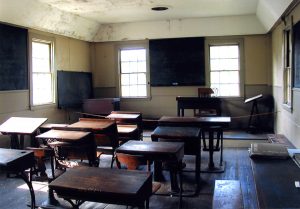 Since its original construction in 1768, the school has been altered frequently, showing various styles and techniques in construction used during the eighteenth, nineteenth, and twentieth centuries. The original one-room school house was enlarged in 1840 by an addition to the rear. In 1847 a shed was built for storing coal or wood and providing an entry vestibule. According to town records, in 1855 the ceiling in the schoolroom was raised, the windows enlarged, and the desks and chairs repaired. The double privy was built around 1898, probably re placing an earlier single privy. There is some evidence that in 1938 the school was used temporarily as a Catholic church and at some time following World War II as a synagogue.

In the article she describes the situation in mid-nineteenth century with respect to teachers’ salaries:

In depicting the general system of education and the curriculum at Putterham School in particular, she goes, on to say:

“A teacher’s life must have been an onerous one. One finds them having been under the watchful eye of one or another member of the School Committee, part of whose responsibility it was to visit, inspect, and, at the appointed time, examine the pupils. Often, when the result of this examination seemed to rate the teacher as inadequate, he, or more often she, would resign. Occasionally, this teacher would be discovered back on the job later. As no salaries were mentioned in those early days, one wonders which needed the other more, the school finding it difficult to replace the teacher or the teacher finding no other way to earn even the small salary then in vogue. Probably she was one of those who loved the work, always hoping to find a better way to get across the subjects supposed to be taught. A quotation from the school report of a hundred years ago tells of one of these examinations. ‘The examinations began at the Southwest Primary School (Newton Street School). The whole number of pupils during the year has been 32. The teacher reports her pupils to be unpunctual, but orderly. There are four classes in Reading and Spelling, five in Arithmetic, four in Geography, one class in Grammar; and fifteen children are taught to write.”

Mrs. Peabody’s vivid description of the building was as follows:

“The building was one room, with a huge barrel stove in the back. The iron chimney ran along under most of the length of the ceiling before turning at right angles to go through the roof. Still nearer the front of the room, a huge ventilator pierced the roof and ceiling, which must have made the temperature around the teachers desk a bit more comfortable than it had been before its installation. This school was originally built, according to school records, in 1768, although as early as 1713 permission was given to the residents of the south part of the town to build themselves a school house. In 1768, help in the building was offered and a teacher assigned. In 1839, it was enlarged. For 1854, I find this paragraph: ‘The Newton street house is large enough for the very small school it now contains; but the ceiling is so low, and the building so ill ventilated, that it Is unhealthy even for that small number. Justice to that district requires that an appropriation should be voted, sufficient to defray the expense of raising the roof, and also of providing it with comfortable modern desks and chairs, in place of the uneasy plank structures on which the children now sit.”
“This suggested work seems to have been done, as in the following year we read: ‘The ceiling has been raised eighteen inches; the windows have been enlarged; and the old uncomfortable desks and tables have been replaced by some which were formerly used in the schools in the Town Hall.’ I think the school, as I remember it, was about as these changes left it. We entered through a short, narrow hallway at the back of the school. This hall had hooks for clothes on one side and a shelf on the other, on one end of which was kept a large bucket of fresh water for drinking purposes. This was brought over from the high service pumping station next door each morning, Mr. Webber, engineer there, being the janitor for the little school. He was in league with Miss Hyde, I am sure, to make our days in that school some of the happiest and most worthwhile of any of our school days. Rudimentary sanitation was attempted. Each pupil was required to have an individual drinking cup. Wood for the huge stove was kept outside in a sort of closet in the hall, west of the entrance. If the day’s supply which was left in the morning beside the stove gave out, the older boys could renew it. Then, still further along at the end of the hall, was our one out-of-door facility. Another was added during the years I was there.”

The present use for the schoolhouse is an educational museum showing how a one-room school was set up, displaying books, teaching aids, and various items of schoolroom equipment.