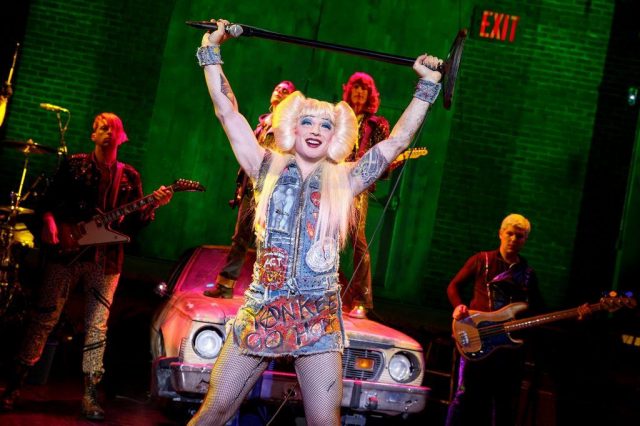 “Hedwig and the Angry Inch,” the glam-rock musical about a drag queen of uncertain gender, blasted its way onto the Shubert Theatre stage this week as a spectacle-laden concert, joined to a stand-up monologue/ backstory crooned into a mike held by Euan Morton, the star, to the delight of the house filled with screaming fans.

The musical created by John Cameron Mitchell, with music and lyrics by Stephen Trask, has been a longtime coming to Boston. Starting out in the downtown grunge clubs of New York City in 1994 with Mitchell as Hedwig, the show moved into an off-Broadway theater in 1998 for two years and gathered a clutch of awards, then on to London. After the 2001 film, and countless productions everywhere, “Hedwig” opened on Broadway in 2014 where it ran for more than 800 performances, winning the Tony Award for Best Revival of a musical. Boston is the second-to-last stop on the national tour.

Unlike the musicals remembered by your parents, with singing nuns or dancing waiters led by a glossy super-star soprano, Hedwig – played by a man – is about an angry drag-queen, born and raised in East Berlin by a distant, single mother, as a “slip of a girly-boy.” She found her ticket out before The Wall came down by marrying an American soldier but he preferred that she become a woman. She endured a sex-change operation that failed, leaving her neither gender but with unhealable scars on her body and her psyche.

After Hedwig followed her soldier to Kansas, he left her. She took up with a young, confused boy, Tommy, taught him everything she knew about show-biz and writing songs, only to be abandoned by him as well after he became a big star. The premise of the musical is that she is following him around the country, playing in tawdry gigs while he packs the audiences into big auditoriums, cleverly suggested by director, Michael Mayer, when a door opens at the rear of the stage to bright lights and a roar of applause.

Hedwig is accompanied on-stage by the Jewish drag-queen, her husband, Yitzhak, who takes the thankless task of second banana to his/her queen. To further blur the issue of gender, Yitzhak is played by Hannah Corbeau, a woman with aspirations of her own.

The marvelous, five-piece rock band, The Angry Inch, seated up front on stage, interacts with Hedwig and Yitzhak throughout the 100-minute, intermission-less show.

To say that Hedwig is one of the great characters of contemporary theater and a star-maker that any actor would die to play, is to understate the oversized ambitions of the theme. The U.S. tour is led by Morton, who originated the role of Boy George in the musical, “Taboo.” As Hedwig, he does not disappoint.

Morton looms over the rest of the performers in gold lame, high-heeled platform boots, a mini-dress of denim and sequins, topped by a sky-high, platinum-blond wig with side curls the size of hot-dog rolls. She/He has a booming voice, except when he turns coy and feminine and reduces the sound to a high whisper. Morton dominates the stage, and the theater when he descends the stairs to confront one or another of the patrons. Muscular and athletic, he cavorts up and down the space, climbing – literally – the proscenium arch and mounting the rusty car that centers the set. In contrast, Corneau, as Yitzhak, is forced to emote through her eyes and her posture, never uttering a word in rebuke, except when she breaks out a stellar voice to accompany Hedwig, and in a surprise transformation at the end.

Trask’s score, with its acknowledgments to Tina Turner, Aretha Franklin, David Bowie, and Iggy Pop, is simply wonderful, brightly performed by the musicians of the Angry Inch. Arianne Phillips’ costumes for Hedwig are as sardonic and funny as the dialogue; with wigs and make-up by Mike Potter. Julian Crouch designed the run-down, back-stage set, lighted by Kevin Adams; Benjamin Pearcy contributed the ever-evolving projections.

If this middle-class, suburban housewife could identify with “Hedwig and the Angry Inch” for its universal human theme of searching for love and recognition, and laugh at the irreverent humor, so can those who can recognize that times are a-changing – in society and in the theater, to be sure.