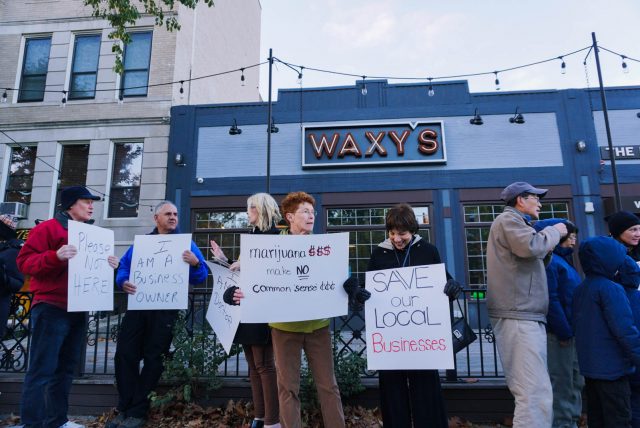 Brookline residents rallied Thursday night against a proposal to put a retail marijuana dispensary in at 1032 Beacon Street, the former location of Waxy’s Modern Irish Bar.

The rally occurred before a community meeting at the former bar about the dispensary proposal, led by Andrea Cabral, former Massachusetts secretary of public safety and CEO of Ascend Cannabis, the company proposing the store.

Brookline resident and rally organizer Paul Warren told The Daily Free Press before the rally that he and many other residents were opposed to the proposed dispensary. Warren said the three key reasons behind his opposition were “kids, college and chaos.”

Warren said he was concerned about the negative effects the marijuana retailer could have on children in the Brookline neighborhood. With the high number of college students in the area, he said he is concerned many might become customers of the cannabis retailer and smoke marijuana in the area, instead of on their campuses where it is banned.

Warren said the retailer would become “the Walmart of weed” and that it would cause a massive influx of people entering the area from outside the neighborhood, which would limit parking for residents.

“We’ve got a big conflict happening in the community,” Warren said. “We just can’t handle it. We will be crushed because there isn’t capacity.”

Retailers in the area around the proposed dispensary, he said, would suffer as a result of the negative impacts of the dispensary, such as people loitering and smoking marijuana, thus causing people to shop elsewhere. If he had known about the potential dispensary before buying his home in the neighborhood a year ago, he said he would have opted to move elsewhere.

“I love the vibrancy of our district, and I love the feel of the area, and I just love it here, but it’s going to change,” Warren said. “And I, as a father of a 4 year old and a 1 year old, I would have went somewhere else, and that’s a huge, a huge thing.”

At the rally, Brookline residents gathered with signs that stated such phrases as “Bad for our businesses” and “No to weed.”

Rally attendee Kate Kalan, 69, said that while she is in support of the decriminalization of marijuana, she does not think the area is the right location for the marijuana shop.

“People could be penalized and actually incarcerated for [minor marijuana offenses]. So, the law just seemed to be so ridiculous at this point that all the other drugs out there with the opioid crisis and everything else going on. So, unfortunately, when you open it up,” the Brookline resident said, referring to legalizing marijuana, “you end up having access, you have stores. I’m really concerned about it being a walk-up shop.”

As a father of two young children, Jeffrey Thorn, 40, of Brookline, said he was in favor of decriminalizing marijuana use but thinks people do not realize the effect the legislation could have on the neighborhood.

Some students said they were concerned about the effect this could have on their peers. Duarte Albuquerque, 16, a Boston University Academy student, said he attended the rally because has already seen how students at other Boston-area schools are affected by marijuana.

“I see a lot of kids going to Boston Latin School, schools around the neighborhood, that go to school stoned,” Albuquerque said. “It’s affecting their performance in school, and letting these kind of things happen would not only affect their school performances, but also affect the community in a negative way going forward.”

Longtime Brookline resident Susan Delong, 73, said she is not against marijuana in general but thinks the opening of the cannabis dispensary would hurt local businesses and make the neighborhood unsafe for children.

“There are lots and lots of children in this neighborhood now,” Delong, who has lived in Brookline for 40 years, said, “and it would be nice to think that they could walk around the corner and go to Whole Foods by themselves and buy cookies or apples and not go past a line that snakes around the block with people who undoubtedly are harmless. But still, it would be an uncomfortable feeling, I think, for kids to do that.”

After the rally, the protesters filed into the former Waxy’s Bar location to hear Cabral and her team present their proposal for the Ascend marijuana store. At the meeting, protesters clashed with Cabral and the Ascend team, with many residents yelling during the question and answer portion of the meeting.

“What happened to respect?” Cabral asked the audience, as residents booed over her.

The meeting ended without a clear decision on what will happen to the former Waxy’s location.