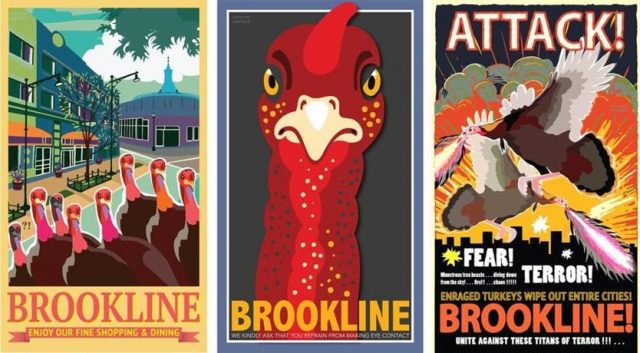 They often strike fear into the hearts of those who come across them: feathered foes known to attack people’s cars, chase down residents, and linger in the streets.

But the turkeys that inhabit Brookline have also become part of the fabric of the community over the years. And for artist and illustrator Caroline Barnes, their presence around town is inspirational — despite the many complaints people may have.

“You either love them or hate them,” said Barnes, who admits that she falls within the “love” category. “I am one of those people that if I see them, I have to stop and have a chat. People will stop and say hello to dogs, and talk to dogs in a dog voice. I talk to the turkeys in a turkey voice.”

For more than a year, Barnes has been using the turkeys she runs into around town as her muse, creating colorful works of art based on her interactions.

A collection of posters she’s made are now on display at Brookline Bank in Coolidge Corner, and she has two more events scheduled in the coming months where her turkey-centric art will be featured.

The works are reminiscent of travel posters from the 1920s and 1930s. Some show angry-looking turkeys breathing fire, flying above the words “terror!” and “attack!” while others paint the birds more whimsically, walking alongside chicks, wearing fancy apparel, or even riding a bicycle.

“Sometimes we take these birds too seriously,” she said.

Barnes, a Brookline resident for nearly two decades, was inspired to start using the turkeys as the focus of her work based on their aesthetic and the way they’ve become a topic of conversation with residents.

“Plenty of people fear them, distrust them, hate them. But does this stop the turkeys from living their turkascious lives? Heck, no,” reads a description about Barnes’s artwork on her website, BrooklineTurkeys.com. “They continue to strut down the street, hold up traffic, block doors, and destroy mirrors. You’ve got to admit, that’s pure moxie. And perhaps this is why I so admire them.”

Turkeys have long been considered a nuisance by the residents. In a way, the abundance of birds has even become something of a running joke online, providing endless fodder for those who encounter the often-aggressive animals on sidewalks and in backyards.

The Associated Press last year reported that as turkeys spread farther into urban communities, they have been increasingly at odds with humans, with complaints about the irksome animals surging over the last three years.

“They’re terrible. Every year they’re worse,” one Brookline resident told the Associated Press. “I really do think that they’re a menace to the town.”

In August 2017, Brookline officials even offered guidelines for how to handle a turkey encounter. State officials did likewise in April of that year.

But Barnes has nothing but love for the birds, even after being attacked herself. (A mother hen once swooped down on her head, she said.)

“I find them utterly fascinating,” Barnes said. “Visually, they’re gracefully geometric and beautifully colored; spiritually — if you can say that given their little walnut-sized heads — they’re determined. I like that.”