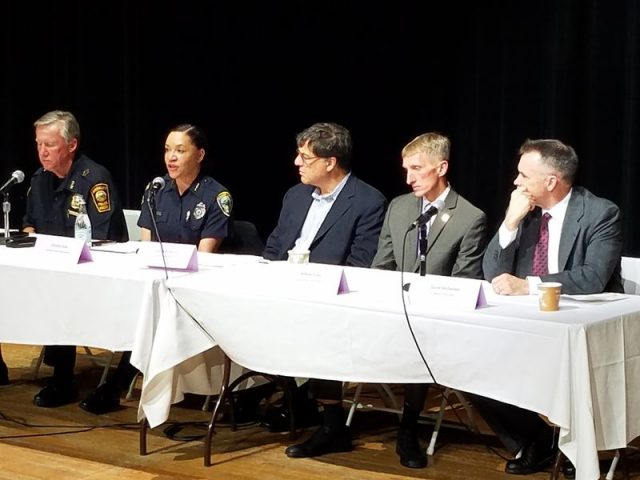 When you think of a police officer, “approachable” and “friendly” might not be the first two qualities that come to mind. But the heads of the Brookline, Boston, Newton and Cambridge police are working on finding ways to lock up the perception that police are robotic law enforcers and are instead caring members of the community who are trying to keep folks safe.

That is not the easiest task. Events in the recent past (from the Cambridge Police Arrest of Harvard Professor Henry Louis Gates as he was trying to get into his own home in 2009, to a couple of fatal shootings in Boston at the hands of police officers, to allegations of racism within the Brookline Police Department) have thrust a spotlight on a side of policing that has at times created a spirit of defensiveness within police departments and those in the community. Add to that shrinking number of people signing up to become police officers and concerns such as terrorism that were simply not as prevalent decades ago and it is a complicated mix. 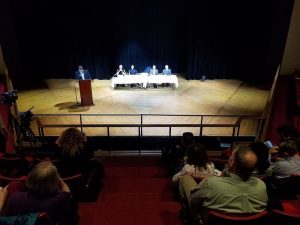 “We’re looking at how we do business. I think every chief here would agree. We cannot arrest our way out of problems in the community,” said Cambridge Deputy Superintendent Christine Elow.

Police Departments are looking more and more at ways to work with the community rather than parallel or on different tracts, she said, and others echoed this at a panel discussion of four area police chiefs including Cambridge, Newton, Brookline and Boston. The panel was organized by the Brookline Office for Diversity, Inclusion and Community Relations and hosted at Pine Manor College in Chestnut Hill.

“We are all going through a tough time [in policing], but I hope people realized tonight that the people representing the area’s police departments are very caring and compassionate. And that would indicate the direction they’re taking their departments,” said Chief Daniel O’Leary of the Brookline Police Department. 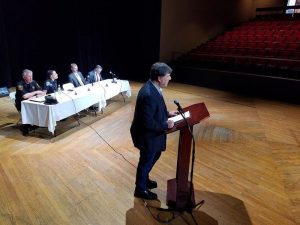 Of course, there are challenges to that.

“In Boston building respect and trust is a big part of what we’re doing. We’re a majority minority city now. Our biggest challenge is have an impact on the violence and at the same time respecting the rights of the community,” said Boston Police Commissioner Bill Evans.

Newton Police Chief David McDonald said the low number of police officers on the force made it a challenge to get out in the community in a more visible, personal way. But police were doing it on their own time, he said he was surprised to discover, volunteering and coaching more than he realized when he first became chief about a year and a half ago.