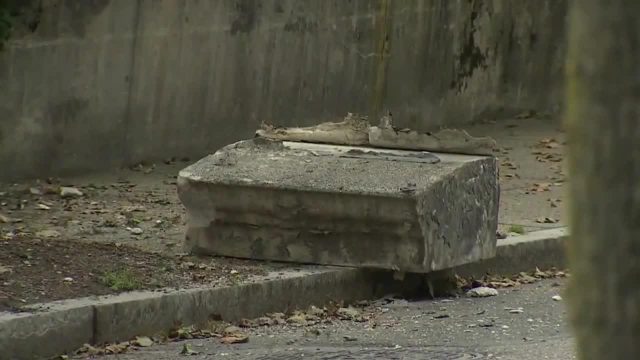 According to town inspectors, there is no building code which requires regular checks of a building’s facade, which they fear has allowed some properties to dangerously deteriorate without detection.

“Codes are reactionary. You take a look at what happened and try to be proactive from that point on,” said Michael Yanovitch, Brookline’s deputy building commissioner.

Following Friday’s collapse on Egmont Street, Yanovitch said his office immediately began to consider the inspection system currently in place. While interior inspections are required every five years, exterior checks of the facade are not mandatory unless there is exterior renovation being completed.

“It’s surprising,” Yanovitch explained, “It’s definitely something that’s been brought from the rear to the front of our minds here, and we will be addressing it in the short term.”

In neighboring Boston, the city code requires that all buildings taller than 70 feet receive an exterior inspection every five years. NBC Boston identified more than 100 buildings in Brookline of similar size. However, monitoring them would be costly for the town.

In most municipalities, general maintenance by the owner is key to preserving infrastructure. Engineers who recently reviewed the property in Brookline determined there were structural concerns to its entire facade, not just the portion that collapsed.

“We did everything we needed to do,” said Anthony Tam of Ka Fai Management.

According to Tam, a partial owner of the complex, Main Street Realty, is in charge of maintaining the property’s exterior. NBC Boston has reached out forMain Street for comment, but they have not yet responded.

“It’s their job. They handle the outside,” Tam said, “When you have a condominium association they’re supposed to handle everything on the exterior.”

Yanovitch said violations will be forthcoming for the property, which is still being used by tenants.

In the short term, the town has closed the sidewalk surrounding the building and placed protections over doorways. But in the long-term, it is possible more stringent regulations will be considered.

“It will be a bigger conversation than just Brookline,” said Yanovitch.