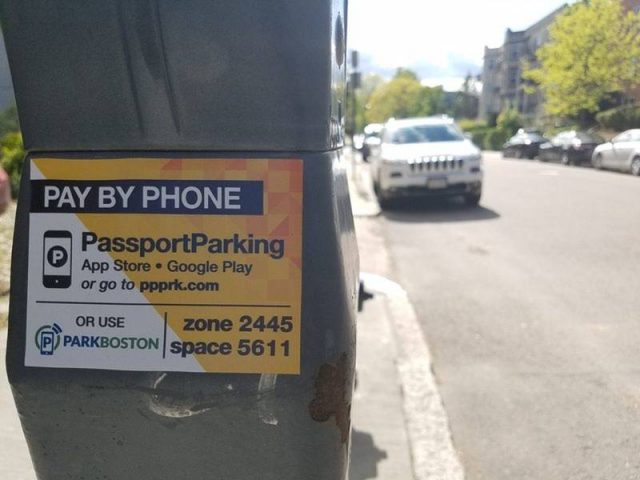 It has been about six months since Brookline joined the likes of Boston and Newton and allowed folks parking in town to pay via a parking app on their phone.

Why a parking app? Aside from bringing the town into the 21st Century it lets drivers to pay their parking meter with their credit cards, even those which do not take credit cards on site, does away with searching for loose quarters under the front seat, and it permits users who misjudged the time they thought they’d be in the store or restaurant or coffee shop to extend their time on the meter from afar.

So how is it going? From the town’s view, swimmingly.

In the past six months there were 160,000 transactions netting $459,000, according to the Brookline transportation division.

The app did not cost the town anything to implement because we went with the standard Passport App and did not go with a custom black label app created just for us like Boston did with ParkBoston. Passport paid for all signs and stickers installed throughout the town. They do have a per transaction fee, however the convenience fee charged to the user covers 100 percent of that fee, said Todd Kirrane of the Brookline Transportation division.

Kirrane did not provide us with a year over year comparison, saying it would not be a fair to compare the amount of revenue from the past six months with the addition of the app to last year’s revenue of the same time. “Since other factors could contribute to overall increases or decreases in meter revenue year to year,” he said.

But he did provide a look at the growth of use of the app, saying the Passport app has seen the largest usage from customers who previously paid using cash or coin at the meters.

From April to August, 51 percent of the meter revenue is cash/coin. Then, 29 percent is from credit card at the meter, and 20 percent of the income from meters is from the Passport app.

“The 20 percent is an impressive penetration number in such a short time,” he said.

Parking and Court Fines are the second largest local source of revenue for Brookline. Approximately 85 percent of that category revenue comes from parking tickets for expired meters, violation of the town’s overnight parking ban, and violation of two-hour parking restrictions. The town projected a bump of $850,000 associated with the proposal to increase meter rates from $1 and hour to $1.25 an hour last year.