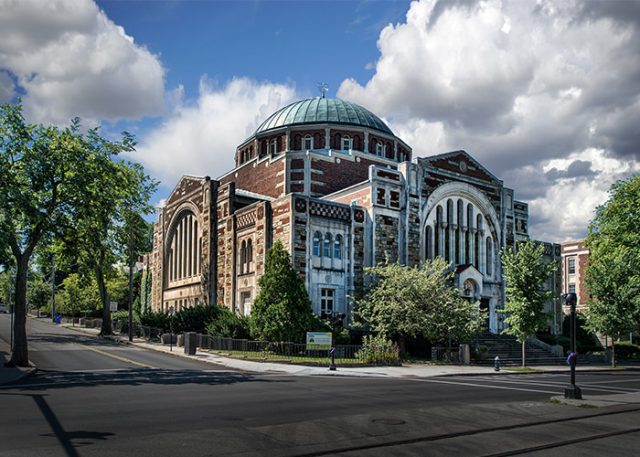 Capped by a dome and rich in intricate detail, Temple Ohabei Shalom stands not just as a testament to Judaism but to the history of the faith in Boston.

Founded in 1842, it is the oldest congregation in Massachusetts and the second-oldest in New England. This year the congregation is celebrating 175 years. In English, Ohabei Shalom means “lovers of peace.”

Though it now occupies the impressive temple marked by wide stone steps and its signature dome topped with a menorah, the congregation started in a home in the North End, according to Rabbi Emerita Emily Lipof.

As the congregation grew it moved from space to space.

Finding a home was not easy.

“It’s a rule in Judaism that if you’re going to be a congregation you must have a cemetery,” Lipof said.

The congregation then turned its attention to finding land to build a synagogue.

In 1845, the state gave Temple Ohabei-Shalom a charter of incorporation and in 1851 the congregation constructed its first building in the South End. From 1863 to 1886 the congregation occupied what is now the Charles Playhouse, according to the congregation’s website.

It wasn’t until 1921 that the congregation purchased the land on Beacon Street, which it now calls home.

Everything about the Beacon Street building, from the menorah atop its dome to the messages inscribed on the ceiling, tells a story of the congregation’s history and how it came to be.

Though it has a rich history, Temple Ohabei Shalom has managed to find a balance between it’s past and it’s future.

“It’s a community that despite being very much rooted in its history, and proud of its history, is always looking forward,” said Rabbi Sonia Saltzman.

When it formed, Temple Ohabei Shalom was Orthodox, not converting to Reform until later when Judaism began to evolve in the area, according to Lipof.

“We were Orthodox because that’s all there was,” Lipof said.

Throughout its life the congregation was influenced by pressures to either be less or more “Jewish,” resulting in some changes, according to Lipof. Some groups even left the congregation to create their own, like Temple Israel of Boston, which formed in 1854.

Eight messages inscribed around the inside of the dome trace this evolution and the pressures often confronting Judaism. One message in particular strikes Lipof as particularly odd.

Located near the Bimah, the platform at the front of the synagogue, is a message that reads “Walk before Me and be thou perfect.” Though it occupies a prevalent space within the temple, Lipof notes that the message aligns more with Christianity than Judaism, as in Judaism there is no one perfect person.

Lipof herself is part of Jewish history not only in New England, but nationally.

In 1988, she became the country’s first female senior rabbi of a large congregation.

This marked a significant change for the congregation which up until 1875, had women and men sit separately.

Lipof attributes this accomplishment to being in the right place at the right time.

“I was [a feminist] but it wasn’t my calling card,” Lipof said.

She helped the congregation find the balance between modernity and tradition. Lipof brought back some traditions like wearing kippot, or yarmulkes, which had fallen by the wayside, and helped modernize other aspects of service.

“If you don’t move forward, you move backward,” said Lipof.

Of particular importance for Lipof was to make the congregation a welcoming place for families and children. When she was a child, a common notion at the congregation was that children were to be seen and not heard.

This is something Lipof believed needed to be changed.

“A childless system is a lifeless system,” she said.

One way Lipof did this was to invite children up to the Arc on the Bimah during services, where she would lay out boxes of raisins for them to take. Watching their faces light up at see the surprise treat was always a favorite part of service for Lipof.

For Lipof, education was key to ensuring the life of the congregation.

In 2009, the congregation opened the Diane K. Trust Center for Early Education Building for children aged 21 months to 5-years-old.

Since then the congregation has continued to place an emphasis on welcoming everyone from families and children to seniors and converts.

Saltzman said the congregation had 10 conversions in the last year alone – an unusually high number.

The congregation has also opened its doors to the community in other ways, like through community service projects carried out by children in the congregation. Where the projects were once geared towards helping only Jewish people, they now can help anyone in need.

“There is a very strong commitment to social justice that has always been a part of the congregation,” said Saltzman.

According to Saltzman, it is that commitment to others in the community and the congregation’s look to the future that has kept it going for 175 years.

“The thread that keeps it all together is a sense of inclusivity,” said Saltzman.