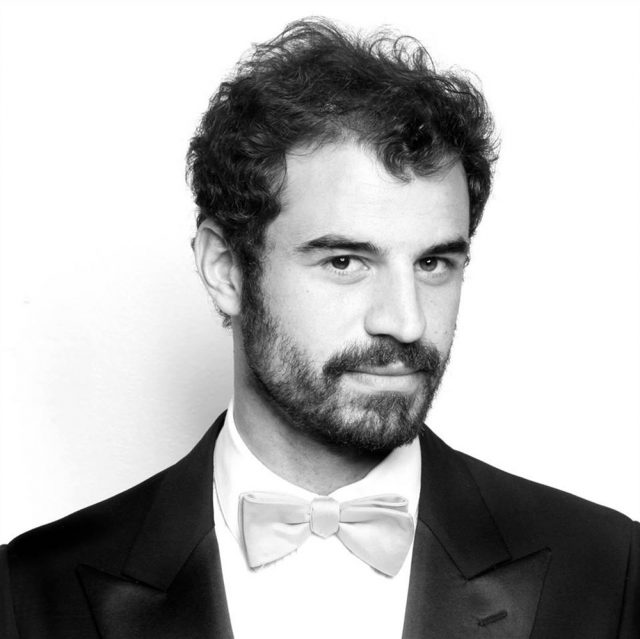 A young man from Brookline, Massachusetts poses for a photo somewhere inside the Palestinian territories. He has got a bullet belt wrapped around his shoulders, wannabe-Rambo-style.

Together with a young woman, he is proudly showing off a terror group’s PK-class machine gun. A gun like that can take down a helicopter or pierce a Humvee’s armor. The AR-15 “assault” gun used to massacre the children of Newtown, CT is little better than an old hunting rifle compared to the firing power of this killing machine, whose likely main purpose is to massacre the children (and adults) of Israel. 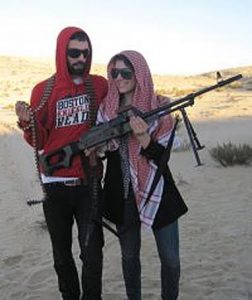 The young man is Max Geller, leader and spokesman of Northeastern University’s Students for Justice in Palestine (NU SJP). The young woman is also a NU SJP member.

Last week, Northeastern University suspended NU SJP after years of anti-Semitic vandalism, glorification of terrorist groups, calls for the destruction of Israel, and other actions by NU SJP’s leadership, all of which have created a hostile learning environment for Jewish pro-Israel students on campus.

NU SJP emerged as a belligerent presence at Northeastern when its members crashed a Holocaust Awareness Week event in 2011 by whipping out anti-Israel signs and yelling insults at the audience and speakers before storming out.

By 2012, NU SJP faculty advisor M. Shahid Alam was bragging to SJP members at one of the group’s meetings that anti-Israel activism on campus has made pro-Israel students afraid to speak out in support of the Jewish State. He can be seen suggesting to NU SJP members that they should be proud to be called anti-Semites and that they should wear this label as a badge of honor.

During the 2012 Israel Apartheid Week, members of Students for Justice in Palestine vandalized the campus with anti-Semitic messages, specifically targeting and defacing the statue of a Jewish donor and trustee of the university.

Israel’s November 2012 operation against deadly rocket fire from Gaza gave NU SJP the opportunity to take their disruptive tactics into the Boston neighborhoods surrounding Northeastern. Protests organized by NU SJP shut down traffic in sections of downtown Boston’s dense Back Bay neighborhood, as its members marched from Northeastern’s campus to the Israeli Consulate. The protesters’ chants of choice were: “From the river to the sea, Palestine will be free” – a call for the destruction of the entire Jewish state, and: “Resistance is justified when people are occupied” – a justification of Palestinian terrorism against Israeli civilians.

At one such protest, NU SJP spokesman Max Geller decided to wear a headband with the emblem of Palestinian Islamic Jihad – the most violent Palestinian terrorist group. Geller has a penchant for fetishizing terrorists, having posted pictures of himself wearing a Hizbullah flag T-shirt and a T-shirt glorifying Hizbullah’s leader Hassan Nasrallah.

Geller is not the only terrorist groupie within NU SJP. NU SJP board member and philosophy graduate student Ryan Branagan likes to do his protesting in a t-shirt featuring convicted terrorist hijacker Laila Khaled clutching an AK-47. For the past five months, his Facebook cover photo was a masked terrorist aiming an M-16 automatic rifle with the word “resistance” in block letters above the gun. Two weeks ago, in honor of International Women’s Day, he replaced this photo with one showing a woman holding the M-16. Tributes to women’s rights aside, these are not your average gun control left-wingers.

By 2013, NU SJP was beginning to get some pushback. After a series of video exposes by Americans for Peace and Tolerance detailing the anti-Semitic climate the group and sympathetic faculty created at Northeastern, the Zionist Organization of America wrote a letter to Northeastern’s administration asking that the university remedy the hostile campus environment for Jewish students. The administration commendably took action. Northeastern President Joseph Aoun made a campus-wide announcement that anti-Semitism will not be tolerated. NU SJP was put on probation.

The administration tried to come to a middle-ground resolution where NU SJP would maintain its status as a student group while at the same time moderating its behavior. The organization’s leaders were asked to meet with student life administrators and to sign a statement agreeing to follow campus rules. NU SJP refused to do either. Instead, its members and sympathizers began to lash out in increasingly threatening ways.

In September of 2013, Boston’s WBZ ran an investigative report featuring Jewish Northeastern students describing the threats and hostility they face on campus. NU SJP posted about the story on Facebook and the comments section under the online story was quickly flooded with anti-Semitic vitriol. A Jewish Northeastern student claiming that she too felt the hostility on campus was told that, “transfer is always an option… so is the oven… You need to take a shower, you filthy joo!” The comments remain published on the WBZ website.

Responding to the WBZ report, Northeastern Law School grad and former NU SJP leader Andrew Pappone wrote: “At least the commenters on the article seem to be on the right side.”

Messages to Americans for Peace and Tolerance about Northeastern were more direct. One individual wrote: “you really need to die so allah can show you the right path … you Jews are all worthless to me, god bless Hitler for trying to do whats right … if i see a jew il tell him whats on my mind and if he has anything to say il decapitate him!! and il sit the rest of my life in jail with honor.” Nice.

Meanwhile, NU SJP continued to inflame the situation. Within two weeks in early 2014, it held two events with Jewish anti-Israel hate mongers Max Blumenthal and Ilan Pappe, who proclaimed from Northeastern’s podia that Israel must be destroyed.

On February 24, 2014, during this year’s Israel Apartheid Week, Northeastern students had fake eviction notices slipped under their dorm doors telling them that they were getting kicked out for no reason because that is exactly what Israel does to the Palestinians. NU SJP then put out a statement mocking Northeastern Hillel’s reassuring message to Jewish students who felt threatened and isolated by this action. In response, the administration suspended the group until 2015.

As one would expect, NU SJP is now playing the victim card, claiming that its free speech rights are being denied, and (echoing classic anti-Semitic memes) that it is being repressed by an administration unduly influenced by certain “rich donors.” The anti-Israel blog mob is weighing in with its usual histrionics and rehearsing the “victim of Jewish pressure” theme.

Reflecting the moral confusion so common on campuses, Northeastern’s student newspaper is supporting NU SJP. Its editors bizarrely claim that: “just because a rule [which NU SJP broke] is on the books it does not mean the school is right to enforce it.” According to the editorial, violations of campus rules are protected freedom of expression as long as such violations are motivated by a political purpose. Never mind that the political purpose in this case is to harass pro-Israel Jewish students.

Students for Justice in Palestine is a rogue Hamas-linked campus organization founded at UC Berkeley in 2000. It was at Berkeley in 2010 that SJP head Hussam Zakharia sent a teenage Jewish girl to the hospital by smashing her in the back with a shopping cart for holding a sign that said “Israel Wants Peace.”

Like so many other radical organizations, SJP exploits academic freedom, free speech, and civic norms to promote an agenda of hate. Sadly, these days the only hatred tolerated on campus is the one directed at Israel and its supporters, and so administrations at dozens of other colleges continue to turn a blind eye to SJP bigotry. Hopefully, NU SJP’s justified suspension becomes a wake-up call for those schools as well.

Ilya Feoktistov
Director of Research at Americans for Peace and Tolerance