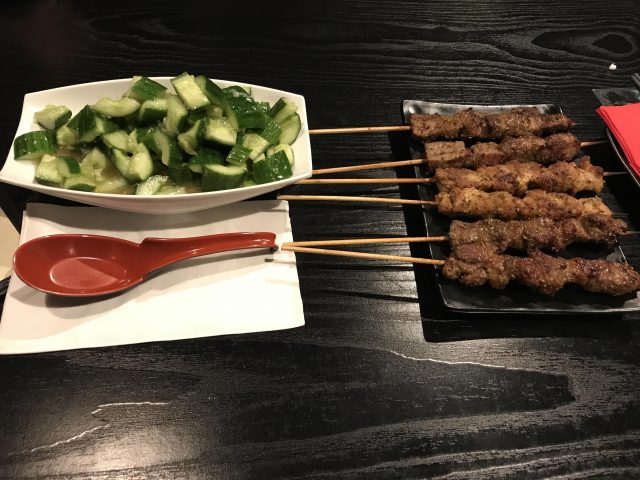 Tucked away on Washington Street, Wow Wu Er Barbecue is bringing the streets of Beijing to Brookline Village.

The restaurant opened at 320 Washington Street in March of 2016, the second of two locations, but Wow Barbecue got its start as a food truck in Boston.

According to Managing Partner Bo Lee, co-founders Steven Liu and Yi Peng started the food truck in 2013, offering authentic Chinese kebabs, or skewers. Unlike Greek or American kebabs, which are often cooked with vegetables, Chinese skewers are simple in concept – meat on a stick with a delicious and aromatic array of seasonings.

That seasoning is what makes Wow’s kebabs authentic.

Difficult to come by stateside, the spices are brought in directly from China, making the skewers exactly like what you might find wandering the streets of Chinese cities like Beijing.

After opening, the food truck was a hit. Having found success in the financial industry, Liu had to leave his six-figure job in Boston in order to start Wow Barbecue.

“He didn’t want to work nine to five, he has always wanted to do something he enjoys,” Lee said.

Though the notion of leaving a nine-to-five job to pursue a passion sounds romantic, Lee noted that it was a big risk and one that would require a lot of work.

That work and vision seems to have paid off as Wow Barbecue is soon to open another restaurant in Providence, Rhode Island.

The restaurant has done very well in the Asian American community and with international students, many of whom are from China, according to Lee.

Part of the draw is the story of best friends Liu and Peng who opened Wow. The other is the authentic dishes.

Lee recalled one day when a staff meeting at the Brookline restaurant was interrupted by two people knocking on the door. It turned out the pair was visiting Boston from Chicago, and had come to Wow specifically for the skewers.

Though the restaurant was closed, Liu went to the kitchen and made them the skewers anyway.

It is easy to understand the appeal.

Simple in appearance and concept, the skewers are juicy and rich in smoky flavor. The meat is cooked on the grill, then seasoned and put back on the grill. For adventurous and cautious eaters alike, Wow’s menu offers a range of skewers, from chicken ($1.50) and lamb ($1.75) to pork belly ($1.50) and chicken heart ($2).

In the time since Wow began making a name for itself in the Boston area, other restaurants have begun offering skewers, but Wow has maintained a loyal base.

“We still make the best skewers in Boston,” said Lee. “I think ours are more authentic.”

Not to be overlooked is the rest of Wow’s menu. In particular, the spicy Sichuan grilled whole fish ($32).

Served hot and bubbling over a flame, the fish is immersed in a spicy red sauce – the heat can be adjusted for preference – marinating in the flavors of garlic cloves, sweet peppers, hot peppers, celery, peanuts, lotus root, potatoes and other mouth-watering morsels.

Because the fish is served whole, there are a few bones but the meat is so tender it falls away easily, making it easy to pick up and pop in your mouth. It is easy to dwell and savor every bite of the fresh fish packed with the flavors of the equally fresh ingredients of its stew.

The dish can feed two to three people, who will likely fight over the last bite.

Though Wow has done well in the Asian American community, it has not struck as strong a chord locally. This is something Lee and the Wow team hope to change.

“We want to attract local customers and that’s been a challenge,” Lee said.

Wow plans to apply for a permit from the town to set up a street sign, in the hopes it will catch the eye of locals.

In addition, Lee said, the restaurant plans to cater for local churches and support community events.

For those looking for more standard American Chinese dishes, Wow offers plenty, but it is the skewers and dishes like the grilled fish that make it well worth the stop.