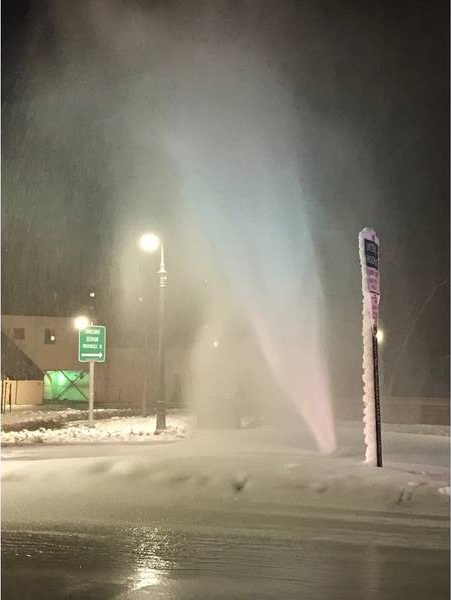 A major water main break at the Boston-Brookline line has been cleared, Brookline police said. All roads are now open. The break, just past the Riverway Overpass, was freezing everything in the area for hours Monday night. Water service was shut off, and crews worked to break the ice that formed all around the geyser.

The break shut down Boylston Street in the area and restricted access to Huntington Avenue. The water quickly turned into ice as temperatures straddled zero degrees.

The water main broke around 7:49 p.m. on Washington Street, Brookline Police said, and service was turned off around 10:40 p.m. The break was “directly in the middle of the outbound side” leading to Route 9, the Boston Fire Department said. Both sides of Washington Street were shut down between Huntington Avenue in Boston and Pond Avenue in Brookline due to ice covering the road.

The Boston Water and Sewer Commission said around 10:15 p.m. that some area residents may lose service.

Boston, Brookline, and State Police responded to the scene. Public works employees attempted to keep ice from forming everywhere, but if you have been outside you know that is no easy task.

Meanwhile, it was not far off from where fire is spewing from the ground.