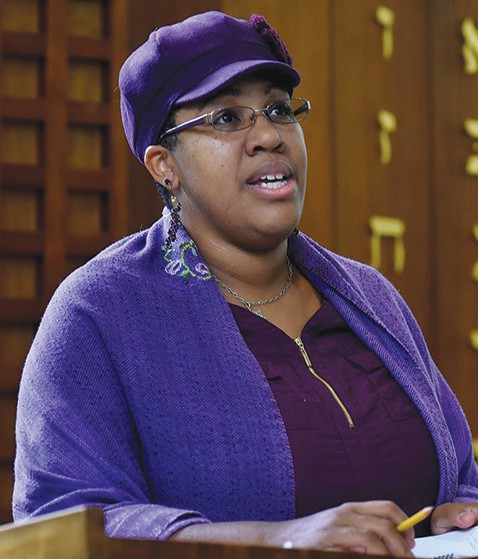 On Sunday, June 23, Temple Har Zion and the South Jersey Jewish community officially said farewell to Rabbi Tiferet Berenbaum, who stepped down as the spiritual leader to take the post of Director of Congregational Learning and Programming at Temple Beth Zion in Brookline, MA. Though her tenure at Har Zion was only two years, Berenbaum infused her congregation and the larger community with a joyful, celebratory approach to Jewish practice that inspired many.

A native of Brookline, Rabbi Berenbaum was raised by two Southern Baptists but found herself always drawn to Judaism. At the age of 11, she began observing the Sabbath because she thought it made sense to rest on Saturdays, and devised her own system of keeping kosher. When she was 19 and an undergraduate at Tufts University, she attended synagogue services with her then-boyfriend, a non-observant Jew, and felt moved to take on a second major of Judaic studies (her first was clinical psychology). She converted to Judaism, and a few years later, applied to the Rabbinical School at Hebrew College.

“The fact that I love Judaism so much is the reason I became a rabbi,” she said. “I encountered so many Jews who were not into Judaism, usually because they knew so little about it. I thought, ‘How is this possible? This is yours, how do you not know this?’ I decided I’m going to take one for the team, go to rabbinical school, and give people access to what’s already there—and then encourage them to make it their own.”

While in rabbinical school, Berenbaum met her husband, Joel, with whom she has a daughter, Galya Bracha, 2. Post-ordination, she served for four years at Cong. Shir Hadash in Milwaukee, WI, before coming to Temple Har Zion in 2017. “When I moved back this way, it felt so perfect to discover Har Zion. There’s a love of renewal and a traditional spirit infused through everything it does,” the rabbi said.

The congregation appreciated Rabbi Berenbaum’s love for and knowledge of Jewish culture and traditional Jewish liturgy, and they also enjoyed her inventive programming, which included a chocolate seder to celebrate Passover, a musical Havdallah service, or a “fake Treif” (kosher food that looks non-kosher, like fake crab, etc.) dinner to celebrate Purim, plays, performances, art exhibitions, and other unique opportunities to express Jewish identity and spirituality. Combining the rich tradition and history of Jewish practice with new and personal ways to connect was at the crux of her leadership.

“People are looking for a vertical connection and a horizontal connection: To connect with other people and with the Greater in a meaningful way,” she said. “The challenge is that for so long, people have not seen it being offered in synagogue. I encourage people to bring their entire selves into the Jewish practice. Just because something isn’t ‘Jewish’ doesn’t mean it’s irrelevant or not Jewishly meaningful. A prayer doesn’t have to be from a siddur. This is not a new idea—prayer was not [systematized] before the siddur—but it feels like a new idea.”

The South Jersey community has mostly embraced Rabbi Berenbaum’s obvious love and enthusiasm for Judaism, along with the fact that she is both female and African-American. “For the most part, it’s been wonderful. I haven’t experienced any discrimination,” she said. “But I say that with an asterisk—meaning, no discrimination to my face. It was made quite clear to me that there were some people that were very against my becoming the rabbi. People left both synagogues (here and in Milwaukee) looking for something else. I often think, which do people have more of a problem with, my being black or being a woman? I think it’s tied. But what can I say? That’s who I am.”

Berenbaum’s return to Massachusetts came from a desire to live near her mother, who has health challenges, and the opportunity to serve at the synagogue she attended for 10 years before she moved to Milwaukee. She said, “I remember sitting in the pews at TBZ, thinking how I would love to be a part of their leadership. Then I thought, ‘You’re too small to do that, that’s not your thing, it’s so Parshat Lech Lecha. But God is always listening.” But leaving South Jersey and the memories she’s made here is bittersweet. “The Men’s Club at THZ threw an awesome Superbowl Party. One of my best memories is the night the Patriots played the Eagles. I was the only Pats fan—but they had a balloon for me.”

As she departed for her next chapter, Rabbi Berenbaum had only the best wishes for the community. “It has been a pleasure to serve in the South Jersey community. It’s been so rich to come together, to learn together, to celebrate chagim (holidays) together. I wish the community so much hatzlacha (success) and continued meaning.”