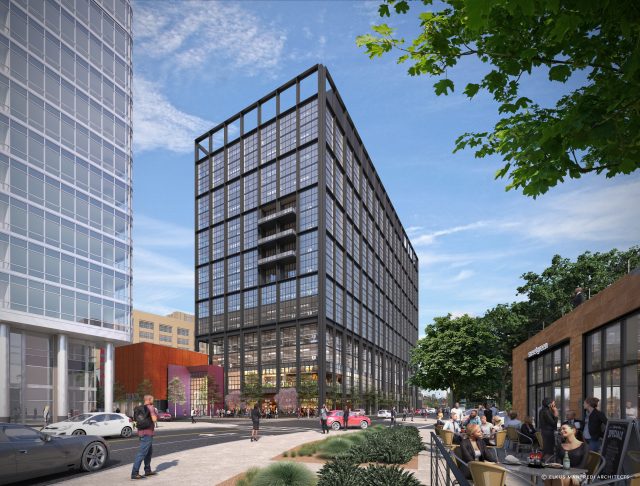 A 506,000-square-foot office and lab building would replace the previously-approved plans for three apartment buildings containing 550 units at the Landmark Center in Boston’s Fenway neighborhood.

Developer Samuels & Assoc. of Boston said today it is renaming the property 401 Park and planning to retain the existing parking garage, previously slated for demolition and replacement with underground parking.

The Landmark Center was originally built as a Sears warehouse in 1929 before being converted into office space. Samuels acquired the property in 2011 and has been filling space in the existing building formerly occupied by Blue Cross Blue Shield of Massachusetts with tenants including tech startup Toast, which is expanding from 37,500 to 81,000 square feet, and the Hatch Fenway tech incubator.

The redevelopment also includes a new 1.1-acre park replacing surface parking at the corner of Park Drive and Brookline Avenue scheduled for completion in mid-2018. Samuels said it hopes to begin construction on the new development in mid-2018 with a 24-month construction period.

Samuels is the second developer this summer to put the brakes on previously approved plans to develop rental housing in Boston.

Equity Residential executives said they will not break ground this year on the 44-story, 470-unit apartment tower approved in February 2016 for the Garden Garage property on Lomasney Way in West End.

At the same time, Samuels has had recent success in the Fenway developing class A office space with its 237,000-square-foot Van Ness tower, which attracted companies relocating from the suburbs and Cambridge.

“Bringing office and lab space to (401 Park) not only meets a clear demand for such space – as evidenced by the success of Van Ness and the early stage tech and creative economy companies that are growing out of the space at Hatch – but it also adds to the vitality of the neighborhood,” Erik Grabowski, executive director, J.P. Morgan Asset Management, said in a statement.