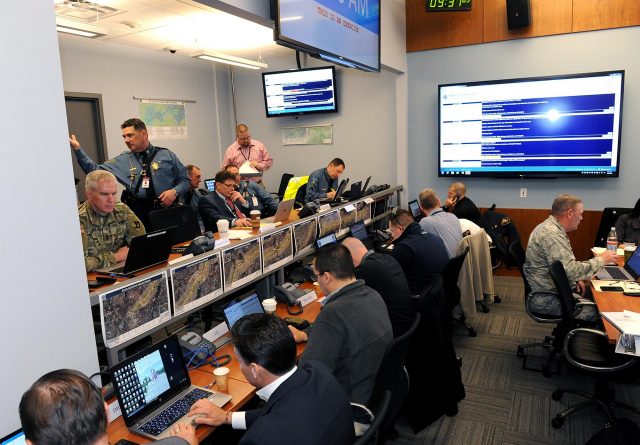 With situations playing out in real-time, nearly 250 public safety officials trained inside the state’s underground bunker Tuesday morning to prepare for next week’s Boston Marathon.

During the drill, a kitchen fire broke out at Masonic Lodge in Hopkinton and someone reported a drone flying near the Ashland-Framingham line.

“It is still undetermined at this time,” the group heard during a briefing in regards to the drone. “Ashland is en route to identify the operator and take steps to address the situation.”

The large-scale functional exercise, which lasted several hours, brought together 70 local, state and federal agencies, private nonprofit organizations and private companies who will be working together at the the Unified Coordination Center at Massachusetts Emergency Management Agency MEMA headquarters in Framingham for the Marathon. Each town and city along the course has its own emergency operations center.

“We will test our ability to communicate, to share our information and to move resources depending on the situation and to make quick effective decisions on small things to major things,” said Kurt Schwartz, MEMA director.

The group worked with many scenarios, including protestors standing on the course with signs.

“Our plans change every year. There are new threats and hazards that we worry about and focus on,” Schwartz said. “A few years ago, we didn’t focus on cyber security and the possibility of some sort of attack on our network infrastructure. We do that now. We weren’t focused five years ago on car-ramming attacks. We are now.”

The team keeps an eye on the weather, too.

“We deal with weather most often and we’re already looking at the forecast for next week,” he said. “It is looking like it might be a cold, wet, windy day.”