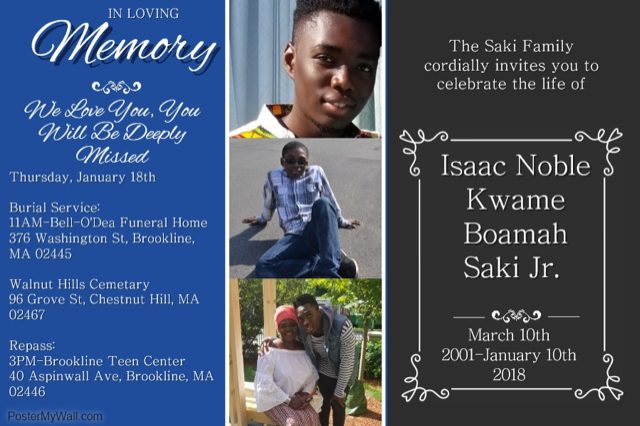 A Brookline High School Student died suddenly on December 10. And now friends and community members are rallying to help support his family. A GoFundMe set up to help with funeral and burial expenses surpassed its goal of $12,000 for funeral expenses in less than a day. Within 24 hours more than 193 people had donated more than $13,000. By the end of the weekend the goal had been more than doubled.

Isaac Saki, a Junior at Brookline High School, was just 16, when he passed away this week unexpectedly.

“He will be dearly missed by everyone who was lucky enough to have known him,” reads the GoFundMe post. Isaac leaves behind his father Isaac, mother Lucy, sister Lily, and brother Owen.

Thursday, families and students were made aware that a student had passed away suddenly in a letter home and through an announcement at the high school. The School Department was working on providing resources to students after the news broke, but because of the family’s request for privacy they did not release the name of the student or any details.

“Though his time with us was too brief, Isaac lived courageously and with passion. He faced challenges bravely. He was a loyal son and sibling. A talented artist and good friend. It is important to the Saki family and all who love them that Isaac be given a dignified and honorable goodbye,” wrote Paul Epstien, the founder of the Brookline Teen Center.

But, unfortunately, according to Epstein, the family did not have resources in place for the expense of a funeral and burial. Enter the online fundraiser.

All funds above that amount will go into a fund supporting the post-secondary education of Isaac’s siblings, according to the post on GoFundMe.