On Tuesday, students, teachers and members of the Brookline community came together for a flag-raising ceremony on Cypress Field honoring Adam, Peter and Prince, three slaves from Brookline who fought in the Revolutionary War at the Battle of Lexington.

After an introduction from history teacher Malcolm Cawthorne, who emceed, Town Meeting Member and Vietnam veteran Neil Gordon read the Board of Selectmen’s Proclamation. Gordon said that we must acknowledge the past even if we cannot change it.

“Whereas we do not have the power to heal the wounds these men endured in our town, we can and must recognize the pain of our past,” Gordon said. “And whereas, it is fitting that the town of Brookline honor and memorialize these men.”

Several high school students participated throughout the ceremony, starting with junior Karina Lorenzo’s reading from the Declaration of Independence. Her recitation was skillful and moving.

Next, Barbara B. Brown, Ph.D in African Studies Center at Boston University, spoke. She pointed out that the honored men were only three among 80 slaves in Brookline at the time of the Revolutionary War.

“Today, we come together to honor three Brookline men, Adam, Peter and Prince, for their part in establishing our country,” Brown said. “Sadly, we know exceedingly little about them. But, I can tell you a great deal about the men who believed they owned them because they were among the most prominent members of our town.”

According to Brown, all we know of Prince besides the fact that he fought in the war was that he ran away and was successful. Cawthorne held up a sign showing the ad Prince’s owner, Joshua Boylston, posted in hopes of finding him. The sign was met with cheers and clapping from the crowd. 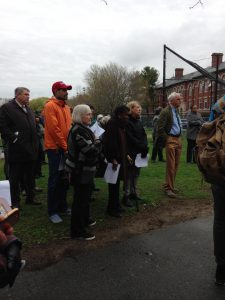 Brown finished by speaking about unity and acceptance of the men.

Under Brown’s lead, the crowd said the names of Adam, Peter and Prince together aloud.

Cawthorne introduced the flag raising, which was performed by Commander of the Brookline American Legion Post 11 Elmon Hendrickson. Following the flag raising, John Bassett played “TAPS” on the bugle, and the crowd stood together for a meaningful moment of silence.

Following the flag raising, senior Coleman Hayes sang a stirring rendition of the first verse of “America, the Beautiful.”

Cawthorne finished the ceremony with closing remarks. He said that we should feel proud Brookline is attempting to correct the abuses of our history, but that we also need to be aware.

“It is for us, the living, to make sure that future Brookline ancestors are not apologizing for our past and current actions,” Cawthorne said. “As much as it is to correct the wrongs of citizens’ past, we hope today is both a history lesson and a closing reminder to pay attention to what is happening today so that it won’t make us sorry tomorrow.”