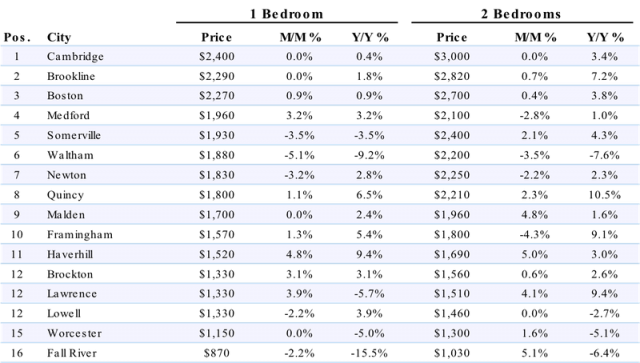 Cambridge and Brookline were the most expensive municipalities in the Boston area to rent either a one-bedroom or a two-bedroom apartment as the calendar flipped from 2017 to 2018.

Zumper’s report analyzed vacant and available apartments in 16 municipalities in December, so the report is a pretty solid snapshot of where the regional rental market stood as 2018 started.

How expensive are Cambridge and Brookline compared with other cities/towns in the region? Cambridge’s one-bedroom median of $2,400 a month in December was nearly $500 higher than neighboring Somerville’s and $130 more than in Boston proper.

And Brookline’s two-bedroom median of $2,820 a month was well more than $500 above neighboring Newton’s and $700-plus ahead of the median two-bedroom in nearby Medford.

See the chart below for a comprehensive breakdown, including month-over-month changes (that is November to December) and year-over-year ones, too.