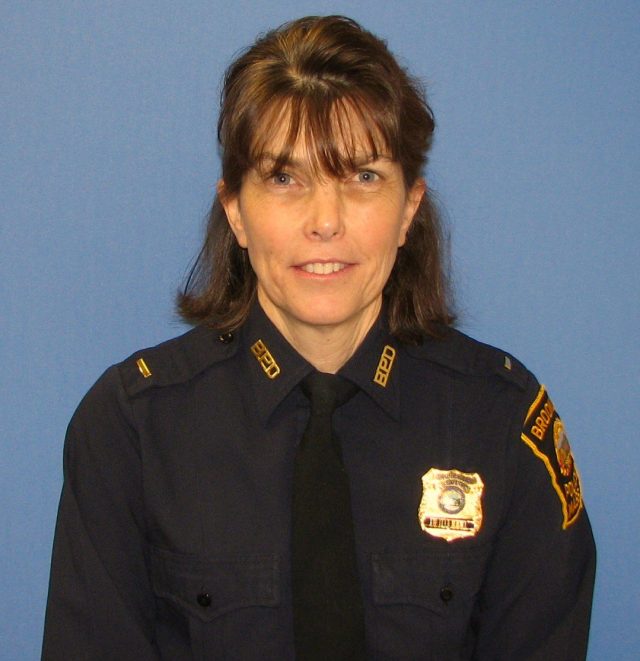 The first woman to ever make the rank of Sargeant and then Lieutenant in the Brookline Police Department passed away suddenly May 12. June Murphy called in sick and died at home, according to police.

“She was beloved by everybody,” said Deputy Superintendent Gropman who said he knew her since elementary school. “It’s very sad.”

She served on the force for more than three decades years and came on the force in the footsteps of now retired officer Judy Hoben who was the first woman to join the police force.

“You’re talking about a woman who came into policing in the ’80s when it was an absolute men’s club and there was no such thing as workplace harassment. It was a different era and she not only persevered, she got promoted. It was courageous. That says a lot about her,” said Gropman.

But it’s not a spotlight she ever wished to be in, said fellow officer Jen Paster, who stressed that Murphy earned her rank the same way everyone else before had done- she worked hard and she studied hard.

What set June apart from so many others was what she did with her rank when she achieved it- she reached back and tried to pull others up with her, said Paster. “She encouraged the rest of us to do the same, by fostering relationships with the Girl Scouts Organization and with the Brookline Public Schools through her “Chief for a Day” contest,” she said.

When, some 20 years ago, Murphy saw that she was one of the only ladies in the job, she helped found Massachusetts Women in Law Enforcement Association, so that those who followed in her footsteps would have a different experience. She was elected president of the organization two terms.

“June was passionate about mentoring and passionate about bettering others,” said Paster. Perhaps it can be attributed to being raised in a large family- Murphy was one of 12 siblings and policing ran in her blood. But she did not make her successes about her. She’d put the spotlight on others, including her two of her brothers who were on the force ( Her father was also police officer. Her father died on the job in 1983, according to Gropman.)

Fellow officers described Murphy, who lived in Walpole, as kind and considerate and compassionate and fiercely loyal. She was also passionate about the education of her fellow female officers – who she was known to keep on to study for promotion exams, even buying law textbooks for them as a way to encourage them to apply for promotions.

When the department’s first female officer retired, she passed along a Bumble Bee wand to June in an impromptu ceremony in the women’s locker room, in recognition of June’s new “Queen Bee” status. That was about as much attention as Murphy might be able to handle, say officers who also knew her to hate being in the spotlight herself.

“The “Queen Bee” title will rightly retire with Lieutenant June Murphy, because there will never be anyone more deserving. I hope that the rest of us don’t let her down,” said Paster.

Murphy leaves behind two daughters, including a 7-year old.