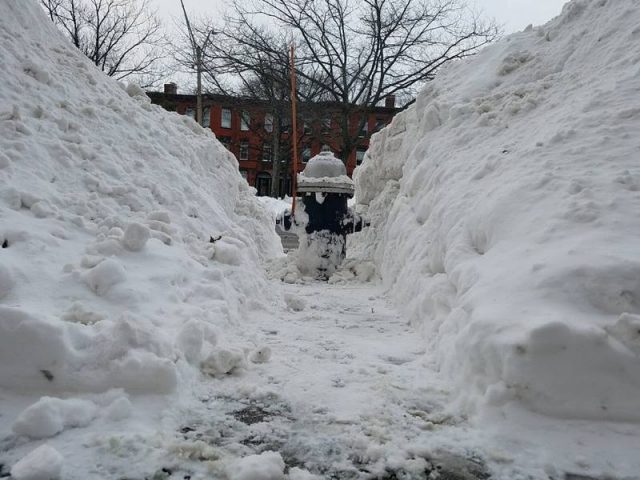 Now that the the Bombogenesis is over and there is a relative heatwave happening in the area with temperatures finally above freezing and a sun that is actually out, town departments report how Brookline did with the first major snowstorm of the year, the largest since the winter of 2014-2015.

Because of extreme temperatures and high winds, this storm was difficult to fight and required many more additional hours to clean, the DPW commissioner said. For Brookline’s first responders, the more difficult storm meant more calls to respond to.

Brookline Fire officials said they responded to a higher call volume than normal answering to dozens of calls between the time the snow started to fall and Saturday morning.

From 8:00 a.m. on Thursday, January 4 (just an hour after the snow started in town) to 8:00 a.m. Saturday, Jan.6, the Brookline Fire Department answered more than 60 calls for assistance including medical emergencies, utility emergencies, calls for fire and investigations, according to Brookline Fire Chief of Operations Keith Flaherty. And that was in between shoveling out the stations. Usually the department mechanic handles plowing around the stations, but since he was out sick, the department had to call DPW for help.

The Department of Public Works had their hands full, too. The crews were at it before the storm until Monday when snow removal operations were completed in all commercial areas, according to the DPW.

Members of the fire department started shoveling at 8:00 a.m. on Friday, and the effort to clear hydrants is still ongoing as we speak, according to Flaherity.

“The Fire Department and the D.P.W. are continuously working to clear hydrants and we encourage all residents, management companies, and merchants to help us to help you by clearing hydrants in close proximity to their homes and businesses,” he said.

The fire department also encourages people to clear the snow from the fire department connections for sprinklers and standpipes and the exhaust pipes from heating systems so as not to have carbon monoxide emergencies.

Extra firefighters were put on duty through the duration of the storm, according to the fire department.

In the past month Brookline fire fighters responded to seven building fires around town, including a natural gas fire in a mechanical room at Pine Manor College on Dec. 6, A fire that spread from a fireplace on Dec. 23 on Abbotsford Road in a home. An overheated boiler that lit a building on fire at 1025 Beacon Street on Dec. 28; a two-alarm fire in the penthouse mechanical room of a Village Way high rise creating heavy smoke condition throughout building with extensive evacuations. There were also two fires on New Year’s Eve: an overheated electrical box in a ceiling of a Centre Street home that ignited and a two alarm fire on Babcock that was caused by thawing pipes. On January 5 there was the fire in a basement on Beacon Street of a commercial basement under renovation.

Brookline storm facts by the numbers:

How much snow landed in Brookline? Recorded 16.1 inches of total snowfall.

How many snow days did students get? 2.

How many snow days do students have left this year? 3 built into the calendar.

How does that compare to the February 2015 storm? The DPW went through 800 tons of salt or sand when two feet of snow landed in Brookline between Thursday, Feb., 9 and Monday, Feb. 13. 2015.

How many trucks were out plowing Thursday? 108 pieces of equipment were used during the storm.

How many DPW staff members were out working? 147 staff.

How much plowing are we talking? Brookline has about 100 miles of public road. The DPW estimates it plows about 253 miles when factoring in multiple lanes on roadways.

How many fire stations in town? 5.

And speaking of clearing the roadway. The town has a bylaw that requires both businesses and homeowners to make sure the sidewalk in front of their homes and business are clear for pedestrians.

Homeowners have 30 hours following a storm to clear the sidewalk in front of their home 36 inches wide, according to the bylaw. Apartment buildings and multi-family homes as well as businesses have three hours following the storm to do the same or risk getting a ticket. And tickets can range between $100 and $250.