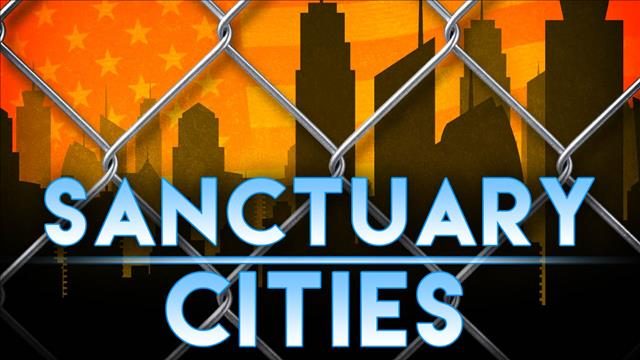 Last month when town officials announced they wanted to reaffirm Brookline’s status as a “sanctuary city” in the face of President Donald Trump’s executive orders that threatened to tighten restrictions on illegal immigrants, some residents were shocked to discover the police department’s only official policy was a 2012 special order that outlined how to hold someone on a detainer request for the U.S. Immigration and Customs Enforcement agency.

One resident got mad.

“Brookline is anything but a true sanctuary city,” said Anne Weaver.

So she started an online petition in an effort to help rally for Brookline to become a “true sanctuary city.”

At the same time the Board of Selectmen charged the Diversity Inclusion and Community Relations Commission with coming up with recommended changes to police policies as they relate to ICE. Anthony Naro, who sits on the commission, came before the board to recommend eight places the working group thought the Police Department could change, including having the selectmen rescind the 2012 police guideline that went along with then-President Obama’s Secure Cities Policy. The police chief has said that the special order made sense for his department at the time, but was only meant as a temporary guideline. As a way to avoid violating federal law, Brookline’s proposal would not restrict local authorities from sharing information with federal immigration authorities.

But that didn’t sit well with Weaver.

“As written, the town’s proposed policy is neither strong enough to protect human rights, nor to ensure accountability from Brookline town officials,” she said, adding the town should refuse to cooperate with ICE in any way.

So far, there’s a lot of Brookline residents who seem to agree with her. Her petition has more than 800 signatures she said, half of which are online, and a number of residents came out to a public hearing on the proposed policy to speak in favor of points she suggested adding to the current proposed policy on ICE interactions in the police department.

She wants to add seven elements, including a statement that Brookline would not partner with ICE in making any immigration arrests, sweeps or raids, or agree to use space to hold people for ICE. She also wanted the town to make clear the Brookline wouldn’t ask about the immigration status of anyone, and wouldn’t initiate the questioning or criminal investigation of anyone for reasons related to their immigration status. She asked that in addition to the police keeping track of ICE detainer requests, they create a log of all communications with ICE and make it available to the public.

Any modifications to policies or orders that relate to any federal law enforcement agency should go before the Board of Selectmen after a public hearing, she said.

And finally, she asked the town to file or join a lawsuit – much like Chelsea and Lawrence recently did – against the president of the United States to have his threat to withdraw funding from “sanctuary cities” declared unconstitutional.

More than a dozen people spoke, most of whom noted at least some support for Weaver’s additions. Others took the opportunity to criticize the Board of Selectmen for not knowing about the police special order, despite the police chief’s explanation that he had the authority to distribute such orders without having to alert selectmen.

Mariela Ames, a court interpreter, inferred that one way to help protect individuals from ICE would be to stop allowing police discretion to arrest individuals on traffic stops if they don’t have a license. Illegal immigrants are not permitted to get a license, and not having a license may be the only other illegal thing they do. Not all towns or cities do that, she said although the TAB was not able to independently verify that statement before publication. But if when a person is arrested, his or her fingerprints are sent to the State Police, then the FBI and then ICE, it puts those people who might otherwise be innocent of major crimes suddenly in danger.

Two women took to the podium, including a Clafin Road woman who choked up when she was letting selectmen know that there was genuine fear in the community when it came to ICE raids and encouraged the board to consider Weaver’s amendments.

“Policies need to be coming from a courageous place,” she told the board.

Another resident spelled it out for selectmen.

“The proposed policy represents an important step in the right direction,” said John Bowman. “I don’t like general order No. 6 (the provision not prohibiting police from contact with ICE), but regardless of what policies or procedures there may be a time when Brookline officials need to exercise judgment and exercise courage to do what is morally right even if it may be against federal law or executive orders. I urge you to take such a courageous stance and I want you to know if that comes to pass I will stand with you, and I hope that the whole town of Brookline will do the same.”

Even as President Donald Trump’s promises for more aggressive action on illegal immigrants prompted Brookline to look into how it defines itself as a Sanctuary City, the president has also spoken about taking away funding from communities that violate federal law by shielding undocumented immigrants.

The threat to end funding concerns some residents at at time when the town will need to vote on a multimillion-dollar override to fund a ninth school and high school renovations in the coming years.

Anthony Naro of the commission tasked with looking into how Brookline Police should change its policy said the potential loss of federal funds should be a relevant consideration, but his working group did not have time to look into the president’s threat he would take away some federal funding, or how that would look for Brookline. He pointed out that also wasn’t part of their charge.

His recommendation came down to the law, he said.

Naro said his subcommittee looked into the policies of neighboring towns and other communities in the state with “sanctuary city” policies, but not all of them were created equal.

“There are some towns that allow a person to be held on ICE detainer policies under certain circumstances,” said Naro. For example if they’re arrested for violent crimes or determined to be a danger to the community, the police have the authority to hold them for 48 hours on the ICE detainer, he said.

“There’s a petition that’s been going around that talks about Cambridge and Somerville’s policies, but it would be a grave error to adopt those exceptions,” he said. “The Constitution does not recognize those exceptions. Immigrants have the same constitutional rights as citizens when they’re in this country. Period. Whether they’re undocumented or documented. And so as with citizens… regardless of whether or not police believe they’re a danger to the community… a state actor including a Brookline Police officer may not deprive an immigrant of liberty without a warrant or other legal process and an ICE detainer simply doesn’t meet that standard and so exceptions such as those adopted by other towns fail to recognize the full constitutional rights of immigrants. And I think Brookline should lead the charge in rectifying this. And that’s something that our chief signs onto as well.”