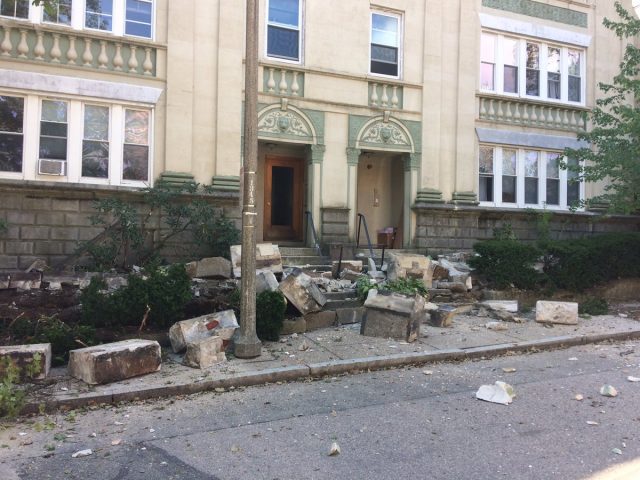 The Brookline Fire department and police evacuated nearby buildings on Egmont Street where part of an apartment building collapsed this afternoon. By 5:00 p.m. police were alerting residents and neighbors that the sidewalks in front of 316-330 St. Paul Street and those in front of 54-76 Egmont Street would be closed and scaffolding was being erected over walkways.

Police said there were no injuries when the cement facade crashed to the sidewalk this afternoon. Several people were evacuated, said Deputy Superintendent Michael Gropman of the Brookline Police Department.

“We don’t know how long term this is. If there’s displacement, we’ll assist them with displacement,” he said.

No word yet on just how many people were displaced, but the address on 68 Egmont, a three story building, has six condo units. The building was built in 1925 and all six units combined were assessed at $3,046,200 in 2017.

Brookline’s Emergency management team was on hand to help those displaced residents and the fire department were working to figure out the extent of the damage. Three companies were on scene, according to fire department officials.