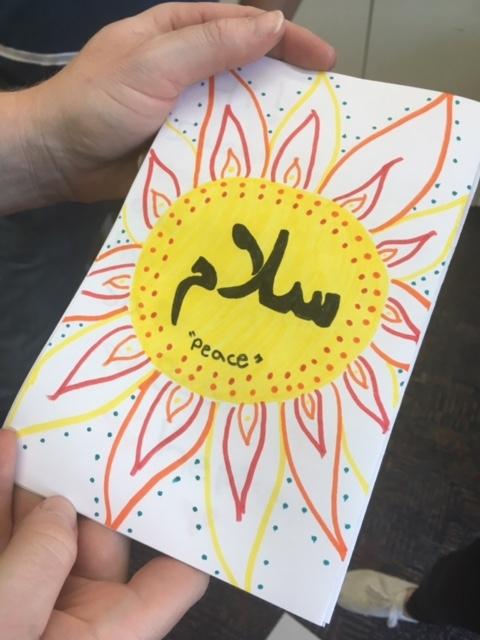 So, in 2016 Wilkins founded Boston Friends for Refugee Support, BFFRS.

The group, which started with just a few of Wilkins’ friends, has since grown into a far-reaching network of over 1,500 people.

Working with both local and international groups, BFFRS fills the needs that other organizations cannot get to. Whether it’s providing kitchen essentials to refugees in the Boston area, or sending items to refugee camps in Europe, BFFRS is ready to help.

A mom of two young kids, Wilkins runs the group from her home. Not only does it mean coordinating with organizations, it also means accepting, sorting and delivering donations. With each donated item that arrives, Wilkins’ house fills until entire rooms are packed with items.

Every three weeks Wilkins, with the help of other BFFRS volunteers, empties her house and sends roughly 500 packages of donated items abroad to refugee camps.

In addition to taking and supplying donations, BFFRS is also involved in initiatives including the You Are Beautiful campaign, which provides women in refugee camps with beauty bags containing creams, charcoal eyeliner and a note with the words “You are beautiful” written in English and Arabic.

The group’s strength is in its network of people.

“Time and time again people have commented that this group is amazing because people come through,” said volunteer Lisa Crist.

BFFRS utilizes a private Facebook page where members can communicate with each other about ideas and needed items. The network is so strong a request is usually answered within hours, if not minutes, of the posting.

“It’s the kindest place on the internet,” Wilkins said.

Volunteer Hajar Delshad, of Brookline, recalled a time when a member posted to the page looking for a particular type of cereal not typically found in the U.S. The reason for her search was a young boy from Nigeria, who had recently come to the U.S. with his family as refugees, and was so distressed that the only thing he would eat was a particular cereal from his home country.

Stories like this are common among refugees, according to Delshad. For the refugees who do make it to the U.S., they often don’t know English, have little to no possessions or money, and have been though truly traumatizing ordeals. According to Delshad, many of the children are also behind socially and academically.

Hampered by an inability to speak English, and so unable find work, refugees can easily become isolated once they reach the U.S., according to Delshad.

This is where volunteers and organizations come into play by offering services like teaching English and helping families find housing and jobs. BFFRS works with all of them.

The refugee crisis hits particularly close to home for Delshad, who came to the U.S. from the Middle East seeking asylum. After seeing how the refugee crisis has become politicized, Delshad is determined to help refugees any way she can.

“They really don’t want to leave their country, they love their country,” Delshad said. “It’s really unfair the way they’re being painted as these money-hungry, come-and-take-my-benefits people.”

One of the core goals of BFFRS is to help refugees by raising awareness about the realities of life for refugees once they come to America.

With that goal in mind, BFFRS is hosting its first fundraiser. The event, called SHARE, will benefit local non-profit Eyes on Refugees, which helps the newly resettled find housing and access resources.

The fundraiser, set for May 20 at the United Parish Church in Brookline, will feature a catered Middle Eastern meal, a silent auction, traditional performances and a documentary by acclaimed filmmaker Casey Hayward.

Rooted in the idea of bringing those in the U.S. face to face with resettled refugees, the film features two families who fled Syria and resettled in the Boston area. According to Delshad, in the film the families talk in Arabic about their lives back home, what brought them to the camps, how they came to the U.S. and how their experience has been since arriving in the U.S.

“I think it’s going to be really powerful and really enlightening,” said Delshad.

As an Arabic speaker, Delshad assisted with the filming. Hearing directly from the families, she said, was sobering.

“I thought ‘my God how can you get up and send your kids to school every day when you’ve been through all of this,’” said Delshad.

With everything donated from the hall in the parish, to the film itself, the fundraiser is a testament to the strength of the BFFRS network, she said.

In addition to raising money, the event will provide attendees with information about ways to get involved.

“There are a lot of people who want to help and they just don’t know how,” said Crist.

As the group continues to grow, so does Wilkins’ list of ideas to help refugees. Though she is juggling work and family, Wilkins, a self-described “bleeding-heart East Coast liberal,” is determined to continue with BFFRS.

“Logistically, yes, it’s a nightmare, but I have no plans of stopping,” she said.