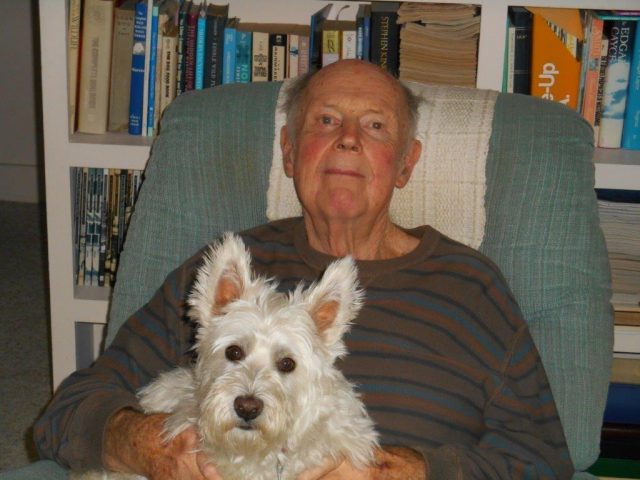 As a fourth-generation Brookline resident, Jim Harnedy grew up surrounded by an entire clan of relatives that can trace their history in town back to the 1850s. But over the years, his family has scattered around the country and not one of his relatives remains in town today.

Now living in Machiasport, Maine, Harnedy has just finished working on an autobiographical novel called “A Brookline Boyhood in the 1930s and 40s.” In his book, Harnedy shares a series of personal memories, interwoven with local and worldwide historical events such as the burning of Brookline High School in 1936, the Great Depression and World War II. The book is set for release on Nov. 14.

In addition to personal anecdotes, you can also find a total of 75 vintage photos depicting Harnedy and his family as he grew up in Brookline.

“A Brookline Boyhood” begins with Harnedy’s family tree, laying out all of his grandparents, aunts and uncles in Brookline. Except for his immediate family, all of Harnedy’s relatives lived on the same street. Many of his relatives were active members of the community — for example, one of his uncles was a firefighter, and another was the postmaster of the Brookline Village post office.

One of the first memories Harnedy presents in his book features Saturday dinners at his grandma’s house. Every week, the entire family would get together and eat.

“The whole clan would show up. For years everyone in the family would gather around the table and dinner would always be the same: baked beans, hot dogs, brown bread and for dessert some kind of pie,” said Harnedy.

After introducing his family, Harnedy then begins a series of memories starting from the 1930s up until his freshman year at Boston College.

“After that, I left Brookline and I haven’t been back to live or do anything in town since then,” said Harnedy.

Even so, Harnedy remembers his Brookline life vividly.

“I didn’t have to do much research. A lot of this came from the top of my head because I have a pretty good memory. I would go back and edit, and if I had questions I would make sure everything was correct,” said Harnedy.

Harnedy describes witnessing the smoke coming out of Brookline High School in 1936 and performing emergency surgery on a kitten during one of his family vacations. He also recounts learning about the German invasion of Poland in 1939 from a portable radio while he and his family were fishing on a lake.

“I talk about what it was like being on the home front during World War II, what radio programs we listened to, my first experience going to a baseball game and our vacations. [The book] tells what life was like before the internet and TV,” said Harnedy.

Harnedy dedicated the book to his best friend, Lieutenant Leroy Randall Filmore Jr., who passed away in a crash in 1958 while doing naval exercises in the Mediterranean. Filmore grew up in Brookline across the street from Harnedy.

Harnedy now lives with his wife and dog in Maine. He is currently a senior editor of “Activities Guide of Maine,” which is a quarterly magazine. He also has extensive experience writing historical novels; “A Brookline Boyhood” is Harnedy’s ninth book. He is currently working on a tenth called “Forgotten Tales of Down East Maine,” which will be published in 2018. Both books will be published by Fonthill Media/Arcadia Publishing.

Harnedy’s latest book offers a unique and personalized account of what it was like to live in the Boston area during the 1930s and 40s. As the Goodreads blurb says, “Through masterful storytelling and a vast assortment of vintage photos, Jim captures the culture, traditions and mood of the country during some of our nation’s most tumultuous times.”