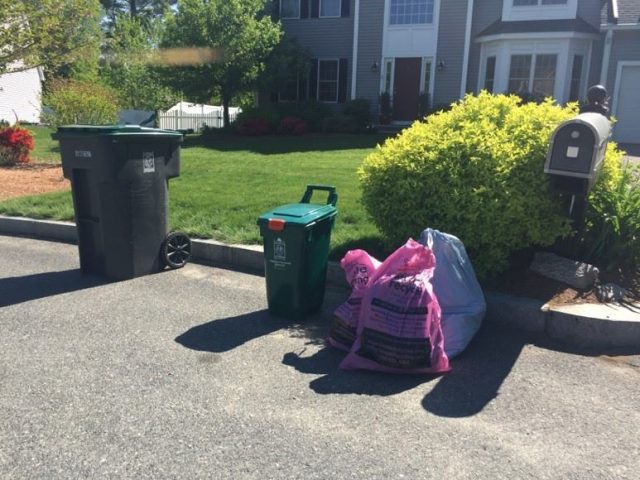 In a growing number of suburbs, going green actually means going pink. These towns have joined forces with a private company, Simple Recycling, to make it easier to get more items recycled.

Residents simply fill large pink bags with old clothing and household items and leave them out on the curb on the same day their town regularly picks up trash.

“95 percent of everything that we collect will be re-used or recycled,” said Sonny Wilkins, vice president of municipal relations at Simple Recycling. “The premise of the program is to make it just as easy to recycle as it would be to throw it in a separate bag and throw it away.”

Since rolling out the program this summer, Natick officials say they have collected about 30,000 pounds of stuff in pink bags, diverting it from an incinerator which charges the town $66 a ton to burn.

That is good for the environment and for the town’s bottom line, according to Jillian Wilson-Martin, Natick’s sustainability coordinator.

“The textile collection program is free to the town and we are able to offer that service at no cost. We also receive a payment from Simple Recycling for every pound of textiles that they collect.”

Six other communities have also signed up for the program: Ashland, Brookline, Burlington, Grafton, Merrimac, and North Andover. Chelmsford is expected to be the next town to join the program.

“Well, it’s easy to do,” said the Brookline mom. “The first week we put one bag out and they gave us back two, so now we have them spread out in different parts of the house and anybody who runs across clothing that is no longer decent or old shoes, or whatever, gets thrown in there. Apparently, it doesn’t have to be in useable condition because they use it for other things.”

In Natick, there are still donation bins for charities. So far, it does not appear that Simple Recycling has hurt them.

“What we found is that those volumes have stayed the same, and while we are picking up just as much or more from the curb,” said Wilson-Martin.

It is estimated 85 percent of textiles end up being disposed of as trash, so it seems to be there is plenty to go around – and to get rid of.

With a laugh, Brubaker said, “Mostly it was a way to clean my house out, where I might not bother otherwise.”

One thing to keep in mind is that there are no tax deductions with Simple Recycling.