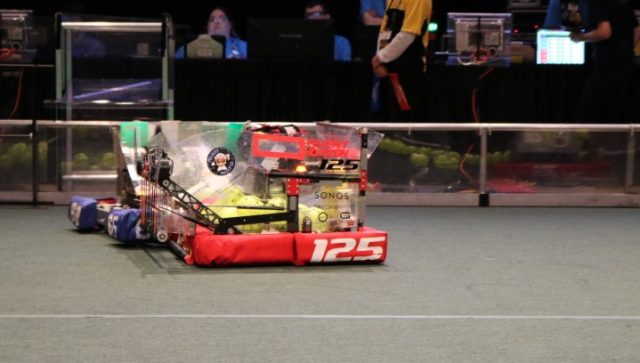 At the beginning of every January, the robotics team is given an assignment for their competition, and the clock starts ticking. They have six weeks to build a robot.

The Nutrons Robotics team of Brookline High School, Boston Latin School and Revere High School recently won their subdivision competition and moved on to the Einstein round at the World Championships. They also won the Chairman’s Award for community outreach.

According to junior and team member Nathan McGuire, the team won their community outreach award for their work with middle school robotics teams throughout Boston and Revere.

“We helped start a lot of other teams and run competitions and programs for kids who don’t have access to the resources we do,” McGuire said, “just trying to get them more interested in STEM things.”

During building season, students on the team spend every day except Fridays and the weekends planning and building in small subgroups, according to junior Lydia Xing.

“We have the mechanical, electrical, programming and non-tech and outreach subgroup, and they all work on their own things,” Xing said. “Mechanical obviously works on the design, and building the robot. Program programs it, electrical wires it up and outreach does social media and outreach.”

According to McGuire, the robotics team enjoys the level of professionalism given to their team.

“I’ve always really liked building things, like legos, but this is using real tools and real software, and everything we’re doing is the same thing that actual engineers are doing, which is pretty cool,” McGuire said.

According to junior Victor Mercola, each competition has its own distinct theme.

“The goal of this year’s game, called “Steamworks,” was to make your robot, give gears to your side, and shoot small wiffle balls into a large equivalent of a basketball hoop, which was themed to look like a boiler,” Mercola said.

According to Xing, one of the best parts of competing worldwide is meeting students from other countries.

“This year, there were teams from Israel, Turkey, Brazil and the Netherlands. It’s really international,” Xing said. “There aren’t tons of activities where you can say that.”

Moving forward, the team hopes to expand their presence in the school, according to Mercola.

“It would be nice to have more influence in the school, because we’re one of the best teams, and even though it’s a combined effort, it should be celebrated,” Mercola said.