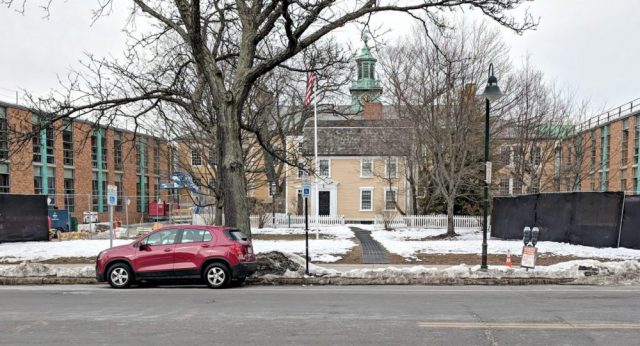 In the past year, Greater Boston has made incremental progress toward reckoning with its fraught racial past. The lone Confederate monument, on a Boston Harbor Island, has been boarded up. Hearings are underway to remove alleged baseball segregationist Tom Yawkey’s name from the street next to Fenway Park. And in May, Brookline will consider whether a slave owner’s name should remain on its newly-renovated elementary school.

Proponents of renaming the Edward Devotion School, named for a Brookline resident who left the town a bequest for a school and listed “1 Negrow” among his assets, say putting the old name on the new school belies the town’s claims of equity and diversity. Others say changing the name amounts to a cover-up.

Brookline’s School Committee has said the naming committee will have to determine who else, besides Edward C. Devotion, can meet its criteria of national significance, cultural importance or community service.

… amassing wealth and holding public office aren’t the only measures of service and significance.

The question of who earns a civic monument — Union or Confederate, abolitionist or slave owner — seems more urgent than ever. But it is only one of the larger questions we should ask about how and why certain figures are remembered, and others get pushed aside.

Brookline, like much of greater Boston, is older than the United States itself, and while that history is rich and important, it has undeniably ugly sides. Our streets, monuments, and schools are not named for women, LGBTQ people, and people of color because they were marginalized, oppressed and not given the same rights of citizenship as white men.

This legacy is reflected in present-day leadership as much as past. Today, only one Brookline public school is named for a woman and none are named for people of color. The town is more than 300 years old, but women were not an elected majority on the Select Board until 2007, and according to the town’s chief diversity officer, the town has hired only three non-white department heads — ever.

The town may take its cues from its neighbor: Boston stands in stark contrast to its major metropolitan counterparts, having only elected white male mayors since the city received its charter in 1822.

It is the obituary problem, recently acknowledged by the New York Times in its new “Overlooked” section: honors for past achievements tend to leave out women, people of color and LGBTQ people because “relatively few of them were allowed to make such a mark on society in their own time,” writes obituaries editor William McDonald. “The tables of power were crowded with white men; there were few seats for anyone else.”

Brookline prides itself on its reputation as a progressive community, but most of its institutions bear the names of those who sat at those old tables of power. The new school — a $120 million renovation that will add more than 24,000 square feet of brand-new construction — offers a rare opportunity to shift that imbalance.

If the naming committee has not yet found a worthy candidate, here are a few to consider:

Edward Devotion had his turn at the table of power. It’s time to make room for someone who never got a seat.

When it comes to a sense of community and pride, it is likely that many, many more of the school’s alumni feel a link to candy-shop owner Ethel Weiss than to Edward C. Devotion or any other town leader, past or present.

Red Sox owner John Henry, a Brookline resident, says he is “haunted” by the racist past of the team under former owner Tom Yawkey. The commonwealth may actually ship the monument from Georges’ Island all the way back to Daughters of the Confederacy headquarters. Surely Brookline’s naming committee can find a namesake for its newest school that will make its students and alumni proud.

This is an opportunity to acknowledge that amassing wealth and holding public office are not the only measures of service and significance. Edward Devotion had his turn at the table of power. It is time to make room for someone who never got a seat.