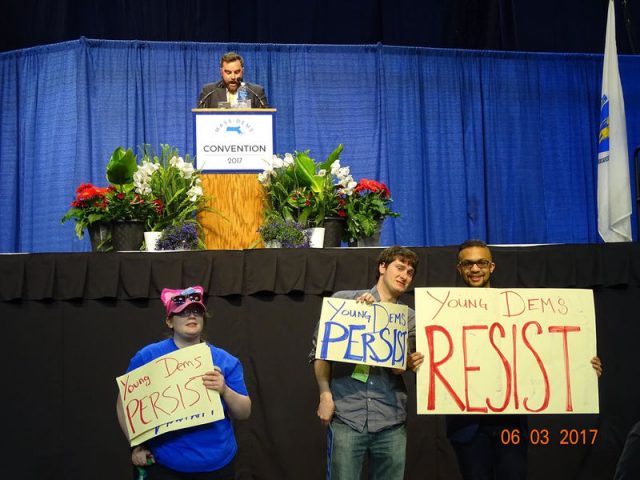 One Brookline teachers aid is going to Switzerland for a special UN human rights program after community members pitched in and helped him via GoFundMe. Though he was orginally hesitant to start a fundraising page, within two days of posting it, he had raised enough money to get him to the UN.

“Within 48 hours I exceeded the goal. And people are still donating. It’s just overwhelming that people wnat to support his kind of work,” he said.

Ronald Cross is a special education teacher’s aid at Brookline. It’s his first year there and he loves his job. He came the Boston area – he lives in Roxbury – to start a new life. One that was different from the life he lived in rural Maryland. What he found was a community and a passion for helping others, whether through politics, or civic engagement.

In days he is headed to the UN as a part of a Quaker scholarship. It is his first time across the pond and he’s more than excited about it.

Since moving to Boston he has taken on a number of hats, including chairman of the greater Boston young Democrats. The youth wing of the Democratic Party for the state.

“I’m a Quaker and part of being a Quaker is being a super activist and helping the world be a better place through non violent means,” said Cross. So he heard about an opportunity recently to go to the UN in Switzerland through friends in his Quaker community. It would involve everything from food security work and refugee work to better understanding how the UN works. There was an intensive application process but it intriguied him. What if he could learn something and bring it back to the Boston area to help people here.

Not the type of person to sit back and do nothing, he set to work, got some references and held his breath. There was nothing for two months. Then on his birthday he got an email it started out as an apology for taking so long to get back. He continued to hold his breath until he read the part where they chose him as one of the participants.

“I couldn’t breathe. I’m telling you, I could not breathe. I called like 10 people. What an amazing birthday present,” he said.

There was one small hitch. Although the program funded room and board once he got to Switzerland, it did not fund the cost of getting him there. He made less than $17,000 working as a part-time para and despite having other roles, he still wasn’t sure how he would come up with the airfare and isnurance money he needed to go.

The mentors he reached out to suggested GoFundMe. That felt awkward, he said. “But I realized this was part of me wanting to do good. And others might want to plug into that mission.”

So he created his GoFundMe page and was asking for $500. Now he is set.

“My goal is to not only learn, but to bring back strategies and resources that can have a direct impact on the people who live right beside us and work with us and need us more than we know. When I return I will be working with specific focus groups that target help for women, LGBTQ issues, food security, and climate change. I am asking for your sponsorship as I embark on this mission,” he wrote on his GoFundMe page.

When Cross came to Boston from Maryland without a college degree and without a plan he had also only engaged politically three times before in his life. And that was voting for presidents. But it was here between Boston and Brookline that he realized people who are involved in politicas are just people who show up and care about things and want things to change.

“I’m a person. I care about stuff. I can do this,” he remembers thinking. He got in touch with city counselor. Got invoved with Democratic Party and worked his way up.

“I can really do a lot of good just by showing up. And now I’ve got a huge platform to reach a lot of people and I definitely don’t take that for granted,” he said.

In his work with the Democratic Party Cross said he’s helped group contact legislators and push to support meals on wheels and other similar programs.

“Working 10 years in corporate America not one time have I felt this good,” he said. “I could not be more fortune than I feel right now.”