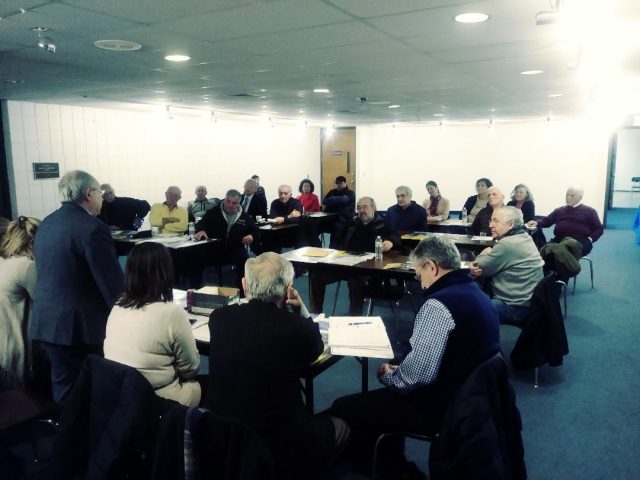 The organizers of the Greek Parade in Boston, in an official announcement, have declared that Greek government officials are not welcome at this year’s parade in commemoration of the liberation of Greece from four hundred years of Turkish occupation. The parade will take place on Sunday, April 07 at 01:00 p.m.

The Federation of Hellenic-American Societies of New England under the presidency of Vasilios Bill Kafkas recently held its second general meeting at the Maliotis Cultural Center in Brookline. The Federation is in charge of the parade’s organization in cooperation with the Greek Orthodox Metropolis of Boston and the Consulate General of Greece in Boston.

The Metropolis of Boston was once again absent. Metropolitan Methodios never participates in the meetings for the organization of the parade. Sometimes he sends a priest to represent him, but this time no clergy was present to even offer the prayer despite the fact that Methodios had been informed and invited. The Federation has also sent packages with parade materials to all the parishes. The prayer was offered by all those present at the meeting.

Federation President Vasilios Kafkas welcomed the delegates and announced the efforts that are under way for the success of this year’s parade.

He again announced that this year there will be a change in the usual program regarding the celebration at the Massachusetts State House. In the past it was held the Friday before the parade, but this year due to the fact that no rooms are available on April 05, the celebration will take place on Friday, March 29 at 12 noon. He also announced that the annual reception at the Consulate General of Greece will take place on Friday April 05 at 06:00 p.m.

The annual Gala Dinner of the parade will take place on Saturday, April 6 at the community center of the Greek Orthodox Cathedral of Boston located at 165 Goddard Avenue in Brookline, MA. The ticket cost per person has been set at $100 dollars.

The memory of Kostas Katsifas, who was killed on October 28 by Albanian police in Northern Epirus will be honored and the Freedom Award will be given to the Paideia organization established by Elias Tomazos in Connecticut, which established and built the facilities of the Center for Hellenic Studies “Paideia” at the University of Connecticut.

Five scholarships will be given to Greek-American students at the Gala Dinner to Greek-American college students. The National Herald will also sponsor a $1,000 scholarship for a student who will be chosen by the Federation according to its rules.
The company that makes the floats will create four of five for the Federation this year, and each association may order its own if it wishes to have a float.

After the parade the Cultural event with traditional Greek dances will follow in the Boston Common Park. Six dance groups will participate.

It was also announced that the Greek School pupils will write an essay on the centennial anniversary of the Pontian genocide by the Turks. The best essay will be read at the State House during the celebration on March 29.

Representatives of the Federation will be visiting various states and cities of New England to inform the local Greek-American communities about the parade and the related activities and to distribute parade material.

The next general meeting for the parade will take place on Wednesday March 27 at 07:30 p.m. at the Maliotis Cultural Center in Brookline.