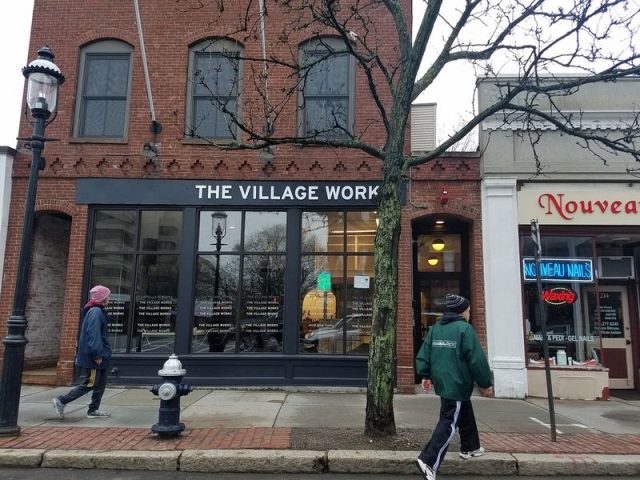 There is a storefront at the intersection of Station Street and Washington Street in Brookline Village that has sat empty for years. Until now. Last month the Village Works co-working space quietly opened in the three story brick building, giving new options to area freelancers, contractors and small businesses beginning to bud. Thursday the Village Works celebrated their grand opening.

Co-working, or renting a space in a shared collective office environment, has exploded in the past decade along side the gig economy – including in Brookline. Now one of those options here – once tucked into three rooms in the Arcade Building in Coolidge Corner – has outgrown that space.

“When we found this building, it was like, this is it,” said Bobby Zuker a co-founder, along with Lisa Wasserman Sivan and Melissa Tapper Goldman who opened the WorksShop space in the Arcade building together in 2015.

Back then Wasserman Sivan and Goldman, both with architectural backgrounds, came together after separately researching the viability of developing a space where people who worked from home but needed a place to meet clients or get out of the house could sit and work in peace, without having to worry about whether or not a space would be available at a coffee shop.

Wasserman Sivan said she had owned her own business for almost two decades, working from her home office and bouncing around cafes. But she realized she needed a dedicated workspace where she could meet clients if need be.

She thought about going to Cambridge or Boston or Waltham, but she really just wanted a space close to home, and dug into researching whether it would be something others would be interested in. Not even two years later and the WorkShop was so popular it was time to expand. Zuker who is also behind Green Line Growers and BrooklineGrown in Coolidge Corner and years experience at ChestnutHill Realty joined the duo and the three jumped on the chance to remodel and take over the building at 202 Washington Street.

Built in 1920 the building has held restaurants – Pacifico and Davios – and the back offices for Brigham and Women’s, but largely it sat empty for the past few years. The trio were taken with the exposed brick walls and charm.

Now the four-story building, offers various spaces for members to use, some 24 hours a day /seven days a week. When you walk in the floor to ceiling windows allow natural lighting to cascade into the room with communal tables and couches, communal tables. Deeper into the first floor and there’s a small kitchen, glassed conference room and small tables. On the second floor there are quiet rooms for phone calls or small meetings as well as a conference room overlooking the village with standing desks. The third floor is home to private offices. There’s another conference room in the basement. And did we mention the pod cast room?

The founders thought about the feasibility of adding a treadmill desk, but ultimately decided against it.

“If we had just a little more space,” said Zuker.

Membership plans start at $30 a month for a pay-as-you-go program and climbs as high as $1,800 a month for private offices and 24/7 access. The Village Works is also part of the Work Bar network, which means folks with memberships can visit other co-working spaces in the Boston area and work there, too, depending on their membership plan.

“The way people work is changing. And their time is really valuable. It’s a really productive space, that’s what we are hearing from people,” said Zuker. Similar to paying for a gym memberships, committing to a plan at the neighborhood community work space can help people focus on their goals, he said. And with all of the nooks and crannies in the building – there’s even some pillows hanging out by the stairwell in the basement to sit and work, there’s something for everyone.

Still, for him, it is also about being a part of the community, he said, adding the Village Works plans to host regular events, like a writer’s workshop here or member generated events to help inspire those who come work here.

And although down the street and around the corner Allison Rimm and Susan Silberberg there is another collaborative workspace – workSwell – on Holden Street, Zuker said he sees that as complementary to what they are doing. The real competition? Panera, Cafe Nero and Starbucks.

But we’re looking for people in the neighborhood who want a better work environment. “Sometimes you get that table at Panera. Sometimes you don’t,” said Zuker.