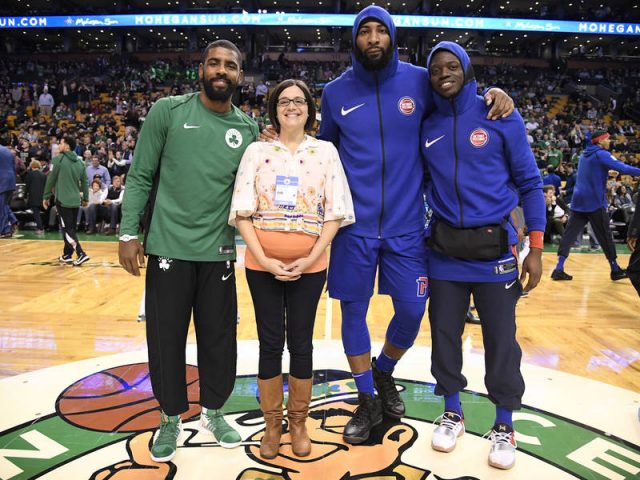 About six months into the creation of a nonprofit that distributes diapers to those in need, Brookline resident Michelle Visser knocked on the door of a woman whom she had recently met and handed her a couple packages of diapers and some baby wipes. The woman’s face showed shock, then she burst into tears and exclaimed “This is better than Christmas.”

And that is a problem, says Visser, who is a therapist and the founder of Diaper Circle. The nonprofit has gone on to help thousands of families in the greater Boston area since 2014. Some, like the woman she handed the diapers to, resorted to using dishtowels as diapers or had no choice but to let their child sit in a diaper for much longer than is recommended.

It is a labor of love. And Monday night the Boston Celtics honored Visser as a “Hero Among Us,” for her work.

As a therapist serving at-risk families, Visser would regularly ask the people she worked with in the Boston area what their greatest challenges were.

“My naive assumption was that it would be the problem I was called in for in the first place, but very often it was lack of food, affordable housing or diapers,” she says.

According to the National Women’s Law Center 32.7 percent of single mothers in Massachusetts live in poverty. A 2013 Yale study noted that some 30 percent of women reported they could not afford diapers. Babies can go through around 10 diapers a day and upwards of 350 a month. For single women living on minimum wage and working to get rent paid, that ads up.

A natural problem solver, Visser started thinking, “OK, we can find resources for food, there’s housing resources, so there must be something for diapers.”

But when she went looking for resources for those who needed diapers (which families cannot purchase on food stamp programs) she came up short around Boston.

Her mind kept going back to work out how something could fill that void. Sure, folks could go out and buy new diapers and donate directly to families in need, but what about all the perfectly good diapers sitting in closets or gathering dust because they were opened already or their child grew out of them?

“That seemed like a really good untapped resource,” she says and she decided to see if she could be the person to collect them.

A friend posted a little blurb on a local mom’s list service, andnd it just took off. Moms and families were calling and emailing her with donations.

Within the first week, Little Lovage Club, a South End business reached out and said they had a huge population of moms and suggested putting a drop off box at their shop.

That is the primary way the Diaper Circle gets the donated diapers. Some people ship new diaper donations directly via Amazon, but between the 12 drop off bins around Greater Boston, diaper drives from schools, or religious groups it’s the bins that seem to work the best and most consistently.

A vertical bin is set up in a shop and when it gets full the manager or owner sends the organization an email and one of a handful of volunteers comes over and picks up the donations. They are trained by Visser herself on how to sort donations, which vary from brand new unopened packs of diapers to unopened packs of diaper wipes to opened but not used diapers to single diapers just unused and in great condition.

The Diaper Circle, which started formally in 2014, has now distributed more than 143,000 diapers throughout Greater Boston.

Although none of the drop off sites are actually in Brookline, beginning early next month Barre 3 in Washington Square will become the first establishment in Brookline to host a diaper drive for Diaper Circle, she says.

Visser, who has lived in town for nearly a dozen years, said she has had her eye on Magic Bean and Tiny Hanger as potential drop off sites, but it has not quite worked out just yet.

“I’m dying for more Brookline sites,” she says. “It’s just a perfect place with so many families.”

Once they sort the diapers the organization gives to local nonprofits who are working with families in need of this. Recently she’s expanded to make an exception for hospitals.

“It’s heartbreaking to me that these families are going home with their new babies and we get a call from the hospital essentially saying we’re not convinced they have what they need,” she says.

Visser says she sees the need getting bigger by the day.

She has worked with someone in Washington State whom she met at a Diaper Bank conference who was interested in using her techniques in her own community, and she is hoping more people will reach out so she can share the Diaper Circle model.

“It’s just been amazing to see people’s response. It’s most often: ‘Oh I didn’t even know this was a problem.’ People tend to assume that there’s some sort of government benefit or subsidy,” she says. “When they find out there’s not, then it’s ‘of course I would give five extra or put a case into the box.”