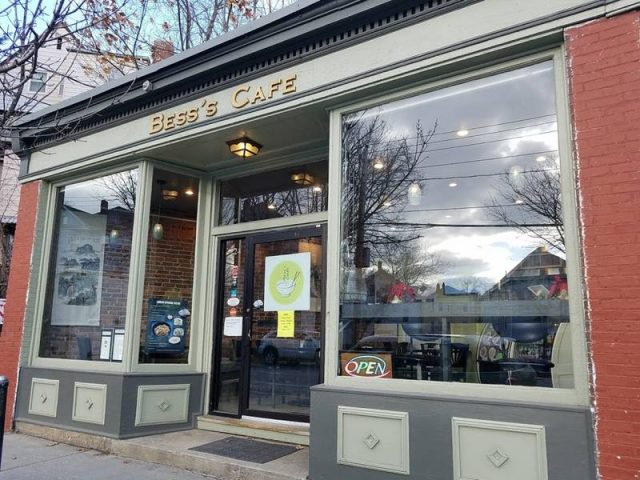 Skinny jeans are still in style but only if they are high waisted, says former Newbury Street personal shopper now the owner of Bess’s Cafe in Brookline. She still knows what’s up in the fashion world, but she also is in the process of mastering a thing or two about comfort food in Brookline.

Some might say she has mastered it this year. The Globe just named her cafe among the most promising 46 new restaurants in the greater Boston area.

Tucked into the strip of businesses on Cypress Street next to the Pizzeria across from Kurkman’s Market is Bess’s Cafe. Sometimes, like one recent chilly Friday, the heat goes off unexpectedly and the owner is racing to fix it. But this is something the customers do not seem to notice between the warmth of the comfort food in front of them and that of the owner Bess Lee.

In March 2017 Bess’s Cafe moved into the corner spot that was the Brick Wall Kitchen for about two years and before that Rita’s Café.

Before opening up shop in Brookline, the Braintree resident actually has had very little experience in the kitchen for the past three decades.

But, now, the past two years have made up for that.

But she was ready to make a change after 27 years working as a personal shopper for upscale stores and fancy ladies. She did not know exactly what that would look like. But she knew she wanted to own her own business. She had an agent on a search looking for small spots. And then she was having food with some friends, she remarked that they were always making food that was restaurant ready and delicious. You should start a restaurant she told them. They brushed that thought aside, but then she thought, “why don’t I start a restaurant?” That stuck. She convinced her friends to teach her how to make fresh Jiang Nan style noodles and small bites – comfort foods from her childhood. And then she convinced them to help cook at the restaurant. It was a 180 from the retail work she’d done on Newbury Street. And she loved it and had a knack for it. What do the two have in common? She has learned to be flexible. About three months in after people kept coming in asking for vegetarian options she sat down and worked out vegetarian options. 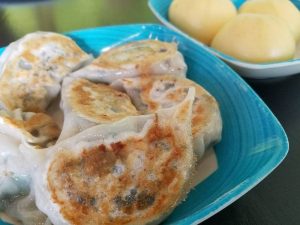 There is now vegetable dumplings with a delightful mix of firm tofu bits, mustard greens, vermicelli, chives, seaweed and a few other spices in there lightly crisped to give it texture ($8) that comes with an in house mixed ginger, soy sauce. Then she added a Cream Custard Bun ($4) with the perfect texture, though like most of her dishes, light. Even the crispy scallion pancake ($4) is light. It is crispy and flaky version with scallion tucked beneath the layers and nothing else. These won’t sit at the bottom of your stomach. You can get them as a meat wrap with either beef or crispy chicken for ($8). And then there is the Dan Dan noodle dish: During a meal with many delights, this was the real winner with sesame paste-enriched firm tofu, preserved vegetables, and matchsticks of marinated cucumber.

“I wanted to create a simple space with a simple menu to create simple, fresh healthy food,” said Lee.

How’s it going one year in? “So far so good,” she says with a shrug and a smile from ear to ear behind trendy glasses. “I’ve learned a lot. I’ve learned a ton. And there have been lots of ups and downs,” she said.

But she is glad she is on this journey. Her family has been supportive, her daughter helped design the menu and sign, her mother is the artist behind the scrolls on the exposed brick wall and her husband has been her business partner. And many of her former clients and friends from her previous life as a personal shopper at those high end stores have helped get the word out about her space.

“I’m lucky, I really am,” she said. And busy. She only takes one day off a week and that day she spends resupplying.

On a Friday at 1:15 p.m. this reporter walked in and only one of six tables was free. She heard conversations in different languages and one woman saying to another young woman “Which would make sense because they came over here to colonize.” The space filled with younger looking people, some eating together in groups and some sitting alone looking at their phones. One man said he came often and his go-to was the Pork Belly Noodle Soup ($12). By 2:30 p.m. the lunch crowd had mostly cleared. And a couple young men ordered lots of pork items to go. 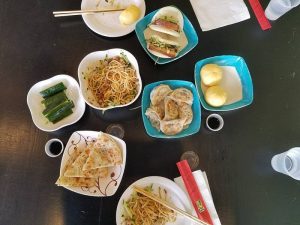 “It’s a neighborhood restaurant,” said Lee in describing the types of people who come by. “It’s both young and old.”

Lee said her goal is to offer new seasonal items as the seasons change. Right now she’s open for lunch and dinner and closes around 7:30 p.m. But she is toying with the idea of opening for breakfast – maybe offering an egg wrap or a savory to-go cup. But she says she will always keep it fresh and simple. “I personally don’t like going to restaurants where the menus are so thick,” she said.