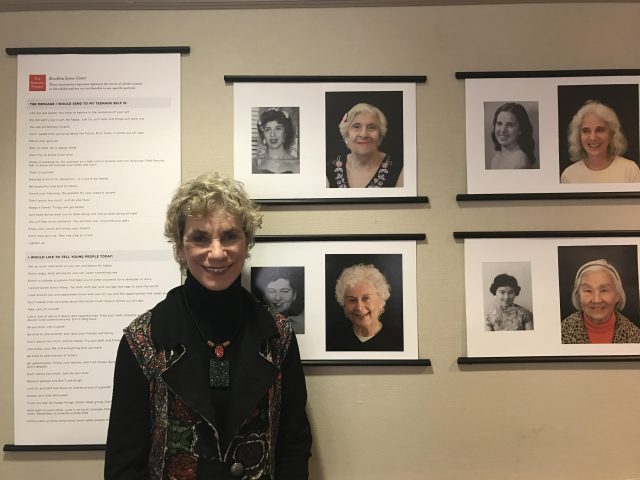 Artist Lora Brody is giving voice to senior women and opening dialogue between generations through her portrait exhibit, “The Reunion Project: ‘Then I was… now I am’”

On display at the Brookline Center and the Goddard House, the exhibit pairs the portraits of Brookline women, ages 60 through 90, with their high school yearbook photos in an effort to reunite them with their younger selves. Through the pairing, the exhibit captures a glimpse into the lives of these women and the experiences they’ve had as they’ve grown, traveled, worked and married.

More than just an exhibit, the project gave the women a chance to reflect on themselves and their experiences, while also giving them a place to share their experiences with the community, in particular, with younger women.

Brody got the idea for the exhibit after receiving an invitation to attend her high school reunion – something she had no interest in doing, as high school was not a time she fondly recalls.

“I was an artist and they didn’t really know what to do with artists,” Brody said of her high school experience.

While uninterested in attending the reunion, Brody found herself wondering about the women she went to high school with. This eventually launched Brody, and her friend and assistant Debbie Sachs, on the nationwide photography project that ultimately brought them to Brookline.

With the help of the senior center, the Goddard House and the Center Communities of Brookline, Brody photographed 50 women in Brookline.

In addition to the portraits, Brody and Sachs presented the women with one-sentence prompts to fill out anonymously.

Intended to highlight the experiences of these women and how they’ve changed, the prompts asked them to reflect on who they were and what they used to occupy their thoughts, compared with who they are now and what they think about.

Personal and yet utterly relatable, the answers range from thinking about boys and cars in high school, to worrying about body image and loneliness.

“Some come from damaged families so they were about surviving their families,” Brody said.

In the section where the women reflected on themselves and their lives today, the answers had the same diverse, but seemingly timeless range, from worrying about having too much clutter, to worrying about health and the type of world that their grandchildren would grow up in.

For many, those words, presented alongside the photographs, had the strongest impact.

“The words really got to me because they’re ageless in a way,” said Ginny Mazur, the community partnership director at the Goddard House.

Mazur recalled a moment when she stumbled on three young women at the Goddard House who were crying in front of the exhibit. When she asked what was wrong, the women said they could see themselves in the women featured in the exhibit.

The exhibit struck a similar chord with Chairman of the Council on Aging Roberta Winitzer’s granddaughter, who, after taking in the images and the words, told her grandmother how “absolutely awesome” it was.

“She saw what you are hoping to convey,” Winitzer told Brody during the TAB interview.

For Brody and Sachs, the process of putting together the exhibits has been an eye-opening process in itself.

“The conversation that was generated by this was pretty spectacular,” Brody said.

She recalled the story one woman shared of becoming pregnant on prom night, giving up her baby, never having another child and how 10 years ago, that woman’s child – a daughter – found her.

Another woman surprised the Brody and her team when the photo she brought of herself, as a young girl – the only photo she had from her childhood – was the ID photo taken of her when she was placed on a Kindertransport train during the Holocaust. According to Brody, that photo also marked the last time that woman saw her family.

For Ruthann Dobek, director of the Brookline Council on Aging and Brookline Senior Center, a projects like this is important because it gives the elderly a voice and a chance to be recognized. Following the exhibit, Dobek said she hopes to incorporate Brody’s work into programs at the center.

“There’s so much more that can happen,” Dobek said.

In meeting and talking with these women, Sachs says she has learned that they often have valuable insights into life that she would not be able to find among women her age.

“I’ve learned that women are strong to get to that age,” Sachs said.

One such learning moment came when Brookline resident Carol Fullerton objected to her portrait because it did not show her wrinkles and spots.

“Well it wasn’t me, I want the wrinkles to show,” Fullerton said.

In response, Brody took the photo again, straight through the camera.

With Brookline as her latest stop, Brody hopes to continue her work taking portraits of women and helping them to share their experiences.

“It’s been a privilege to have these women work with me,” Brody said. “They’re beautiful, it’s a different kind of beauty, and they’re strong.”

The exhibit will be on display at the Brookline Senior Center and the Goddard House until late Spring.