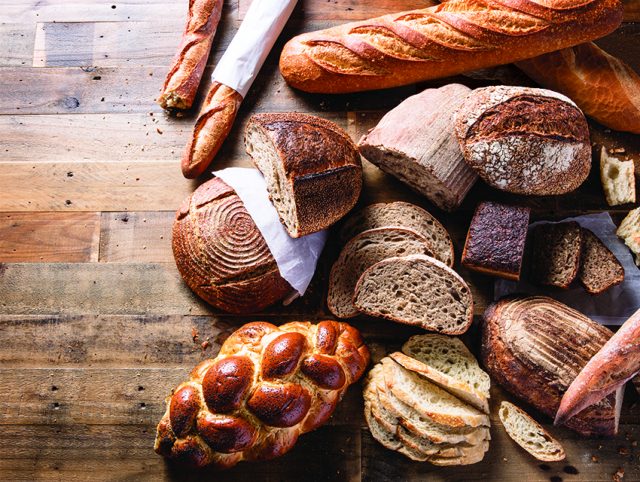 When they started the tiny Clear Flour Bread in a residential neighborhood near Coolidge Corner in 1982, Christy Timon and Abe Faber had a philosophy about running a business that at the time set them apart from pretty much everyone else baking. The two would make baguettes the way they were made in France, they would not buy mixes or anything else partially prepared, and they would use the best ingredients they could find, whatever the cost. No one used the word “artisan.”

They were willing to work like dogs, even if it meant delivering bread at dawn by themselves and years without a vacation, which it did. Now, 35 years later, after refusing offers to franchise, blessing former employees who opened their own bakeries, and not selling to a larger enterprise because, as Faber says, “we have friends who watched their life’s work go down the tubes,” the couple is now Clear Flour’s former owners. They sold to a couple about half their age.

New owners Nicole Walsh, 29, and Jon Goodman, 33, newlyweds, took over from Timon, 65, and Faber, 56, in November; the founders will stay on to mentor for a year. They had to learn many things the hard way, they say, all while raising twin daughters, Coco and Tracey, now 23, who both make pastries at the bakery.

If it all looks like an incredible tidy and enviable transfer of ownership, it is. And it all happened by accident. Goodman’s parents, Pam and Alan Goodman, live in Brookline and are devoted customers. Jon remembers being wheeled in a stroller to the bakery and seeing the Clear Flour neon sign in the window. His brother worked there one summer. When he told his parents that he and Walsh wanted to open a bakery in San Francisco, where they lived, his mother asked Timon and Faber if they would talk to the young couple.

“It was the last thing I wanted to do on a Saturday,” says Faber, who had advised dozens of would-be owners, most of whom did not know enough.

His bakery has such a small retail space that customers are typically lined up outside, no matter what the weather. “I live close by,” says Tatte Bakery and Cafe owner Tzurit Or. “They have phenomenal bread.” Regulars queue up for crusty, pointy baguettes that crackle when you break off a piece, dense whole-grain loaves, golden challah, rich brioche, croissants, morning buns (like sticky buns), fruit tarts, scones, giant cookies, and little French confections like miniature canelés, small eggy cylinders famous in Bordeaux. About 30 employees work there day and night, and no job is in jeopardy.

On that Saturday, something about Walsh and Goodman struck Faber. “They’re interested and nice and they get it,” he remembers thinking. (Faber thinks most bakers are nice, and he is suspicious when they are not.) And, he says, “They share our values.” But Faber and Timon were not interested in selling, though they had talked about it every time their lease came up for renewal. And their lease was coming up for renewal, so the discussion started again.

“We kept the conversation open,” says Timon. She is the baking half of their duo; Faber does the business end. They saw a mirror image in Walsh as baker and Goodman as business manager. At one point, Faber asked them, “Are you really thinking it might be either coast?” A change of hands like this, he thought, “felt organic.”

They made an offer. When Walsh saw the e-mail, “My heart stopped for a moment. Jon always wanted a bakery like Clear Flour.” Rentals in San Francisco, the two discovered, were way over their budget. She says this opportunity was “an incredible miracle.”

A smooth transition is what every buyer, seller, and customer is looking for. Tatte owner Or sold 50 percent of her bakery to Panera Bread Co. in 2016 because she wanted to work with then-CEO Ron Shaich. Now Shaich bought all of Panera’s shares in Tatte, says Or, and she was delighted with the new partnership and independence. They just opened their eighth Tatte in Back Bay.

“I was looking closely at Clear Flour,” says Or. “It seems like the [new owners] share the same passion and love for bread. I’m pretty confident they made the correct decision.”

Christy Timon never really decided to go into the breadmaking business. It sort of decided itself. She rented the space as Cafe Small Caterers, baking bread to go with her menus. Word spread about her traditional European-style baguettes and loaves and she had so many orders that she quit catering; wholesale became most of the business with a little retail in the front. Now wholesale is 20 percent with the rest retail, a slow inversion of numbers that took over a decade.

Walsh began baking seriously when she was a teen in Eagle, Idaho (population 23,000). She had worked at Lilly Janes Cupcakes, which made everything from scratch; she bought Lilly Janes when she was 18 with money from her father’s fiancee. “I was hanging out with friends at night, going to work at 2 a.m. to 6 p.m. It was a crazy way to get into the business.” She was also taking Excel classes, she says. “I had no idea what I was doing.”

She sold the bakery and went to the Culinary Institute of America at Greystone, in St. Helena, CA. Jobs that followed including a stint at Mission Pie in San Francisco. She met Goodman when he was at La Boulange, working in management, opening locations.

One day Goodman told Walsh that they could open something together. “I can manage and you can bake. This could work,” he said.

Financial backing is coming from Goodman’s father, his uncle, and two brothers, Adam and Peter. “This is a dream come true for my dad.”

When the younger couple joined the bakery late last year, Walsh was at the counter when a customer came in. “I’ve been here since the first day,” he told her, “and I’m rooting for you guys.” That is the message they have gotten ever since.

Says Faber: “Running a bakery is about getting a call at 3:00 a.m. that something’s not working, or at 6:00 a.m. that they can’t get the van started, or an employee sprained an ankle.”

The new owners look at him as he says this and do not seem fazed.