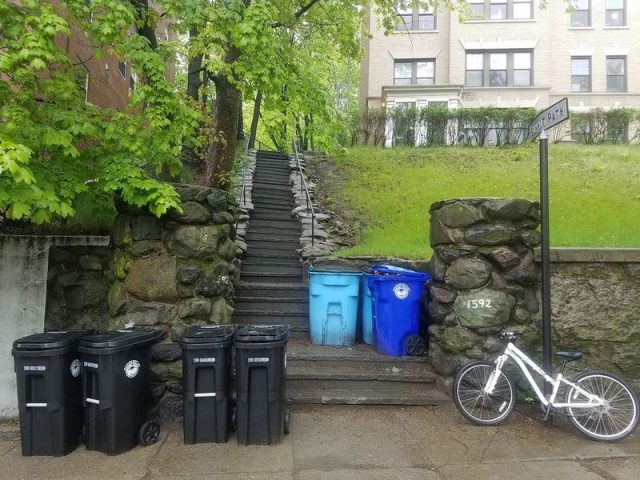 You could not miss them this weekend. Sunday morning the streets were lined with the black trash carts. What are they for? It is all part of the hybrid pay-as-you-throw (PAYT) system the town has been working on rolling out for more than a year.

The carts are part of a system where customers select a different size trash bin based on their household’s refuse output and pay according to how much garbage they toss. Waste carts are collected by a vehicle equipped with an automated arm, which lifts the waste cart from the ground, and dumps the contents into the vehicle. If a customer has more trash than their cart can hold, pre-paid, plastic overflow bags, imprinted with the Town seal, will be available for purchase at local retail establishments.

The idea began as a way for the town to encourage more recycling. Rather than billing customers at a flat rate of $200 per year, customers will be billed based on the waste cart they choose. This means some residents will see their annual refuse costs, while others may see an increase. 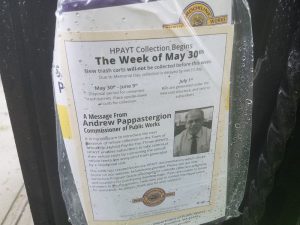 Brookline’s Pay-As-You-Throw system begins the week of May 30, and its allowing a cart exchange, without penalty, until June 16, 2017. Any changes to waste cart sizing will be reflected in the quarterly bill following the exchange, according to the town website.

Late last year a number of residents raised concerns that not everyone had a place to store the bins and the requirement to have the bins might be a burden on residents who were disabled. In response the town said in extenuating circumstances, some may qualify for a Waste Cart Waiver. Waivers will be considered for residents who are unable to physically maneuver a wheeled waste cart curbside on collection day, and for residents with geographic obstacles such as multiple flights of stairs.

And what if you live in an apartment building? Brookline property owners, landlords, and property managers are responsible for placing an order for new waste carts, renters are off the hook.