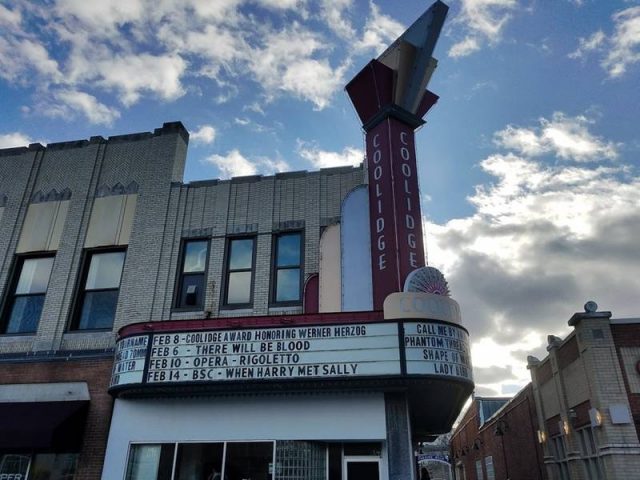 If you have not walked past the Coolidge Corner Theatre recently, you may have missed the signals: the posters, the screenings of “Into the Inferno”, “Grizzly Man” and “My Best Fiend”. It all points to this afternoon, when the theater will honor iconic filmmaker Werner Hertzog.

Herzog has produced, written, and directed some 60 feature and documentary films. Francois Truffaut, called him “the most important film director alive.”

It may come then as no surprise that the Coolidge Corner Theatre chose to honor him at this year’s Coolidge Award.

“He’s been on our wish list for year. Everyone on staff is a huge fan of his films,” said Beth Gilligan of the Coolidge Corner. The criteria for the annual award is someone who has contributed to the art of film and film making and original and creative contributions, she said.

“He’s certainly more than creative. And he’s had such a long and diverse career,” she said adding that the fact Herzog was accomplished in both narrative and documentary film styles stood out to them.

What was a surprise, she said, was that Herzog said he would come receive the award. Last year when the Coolidge decided to award Actress Jane Fonda they had some faint connection to her. This year the folks at the theatre decided he was their first choice but did not have any connections and had to just email his office.

“This was really just a shot in the dark,” she said. They emailed and hoped he’d say yes.

“He emailed us from Moscow where he was filming Gorbachev,” said Gilligan. “He said he was really impressed with the caliber of people we had previously honored.”

Herzog will be in town for a Q&A following an afternoon screening of one of his documentaries that debuted in 2016 and then on stage again in the evening to receive the Coolidge Corner award at a fundraiser for theatre.

The first event was a way to host a more inclusive event for those who couldn’t afford to shell out the money for the more expensive black tie dinner.

But tickets sold out fast.

“I think his appeal is really multi-generational,” said Gilligan. Herzog has been a guest star on the sitcom Rick and Morty. He has been on Parks and Rec and then there are those who have been following his decades long career.

As for what the folks at the theatre hope others will get out of Herzog’s presence?

“He’s really a visionary film makers he’s carved out a career and a life for himself that’s quite unique and goes to show you can accomplish so much. I hope people hear him and are inspired by that and his movies are really uniquely cinematic. There’s no comparison seeing those, they’re so extraordinary,” she said.

And seeing them at the Coolidge is another reminder the brilliance of watching movies in a theatre, she adds.

“We’re just really honored that he’s said yes and is coming. It’s just a thrill and an honor to get to host guests of this stature.”

More on Herzog from the theatre:

Herzog is widely known for his prolific and daring body of cinematic work, including both narrative and documentary pieces. He began his film career in the early 1960s and quickly established himself as a powerhouse within the evolving New German Cinema movement of the 1970s.

Over the next several decades Herzog would challenge and inspire movie-going audiences with his stunning excessive realism, eccentric and deeply intense protagonists, and poignant visions of anti-conformity.

He has produced, written, and directed more than sixty feature and documentary films comprising such world-cinema classics as Aguirre, The Wrath of God (1972), The Enigma of Kasper Hauser: Every Man For Himself and God Against All (1974), Nosferatu (1978), Fitzcarraldo (1982), Lessons of Darkness (1992), Little Dieter Needs To Fly (1997), My Best Fiend (1999), Grizzly Man (2005), and Cave of Forgotten Dreams (2010). In addition to his dynamic directorial career, Herzog has published more than a dozen books of prose, and directed as many operas.

More about the award, from the theatre: