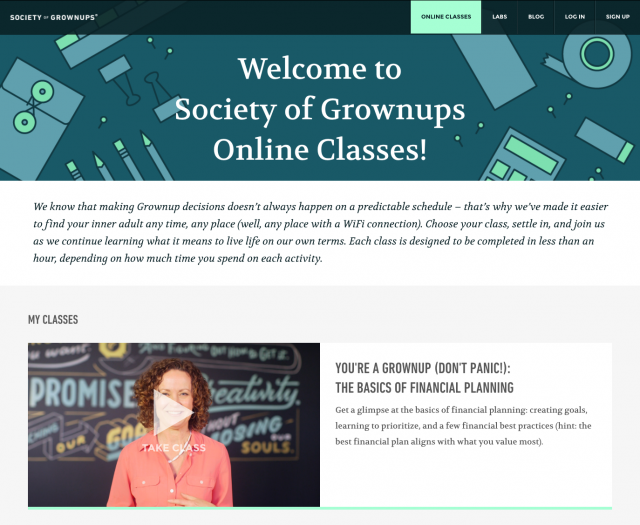 Until recently, the Society of Grownups’ office in Brookline, Massachusetts, was a warm, wood-paneled space, filled with richly lacquered tables, chic accents, and bronze lamps like you would typically see in library reading rooms. Says director Xiomara Lorenzo, “One of the things that attracted me to [the Society] was that it looked nothing like a bank.”

That aesthetic has everything to do with who the organization hoped to attract. Founded by life insurance company MassMutual in 2014 in collaboration with design and consulting firm IDEO, the Society of Grownups started out offering “adulting” classes to Boston-area millennials looking for guidance on anything from retirement planning to collecting art. Courses held at the Society’s offices, with names like “You’re A Grownup (Don’t Panic): Basics of Financial Planning,” could be complemented with supper clubs (“Getting Better With Age: A Closer Look at Investing and Fine Wine”), as well as sit-downs with certified financial planners.

The Society launched to glowing press and seeming success. In its first 13 months, some 9,000 people—29 years old on average—registered for accounts on the company’s website, the first step toward attending classes or accessing financial-literacy tools. In October 2015, Society of Grownups announced plans to open similar “adulting” schools across the country.

Almost exactly a year later, the organization took an abrupt U-turn, cancelling all of its scheduled classes, shuttering its chic Brookline location, and decamping to an office that Lorenzo describes as “very much like any traditional startup.” Society of Grownups announced that, rather than operating face-to-face, it would focus exclusively on the medium of choice for its target market: the internet.

When it comes to financial literacy, surveys paint a dire picture of millennials. One study by payment tech firm First Data found that almost three-quarters of millennials would rather go to the dentist than listen to banking advice (and people really hate the dentist). Another study, by financial planners Personal Capital, suggested that a similar percentage do not know what they are worth financially. Perhaps worst of all, a survey from financial services provider TIAA and the George Washington University School of Business indicated that, while 85% of millennials agreed that they are “good at dealing with day-to-day financial matters,” only 14% could correctly answer all five questions of a basic financial-literacy quiz.

“This is a really clear need,” says Allen Adamson, founder of BrandSimple Consulting, which does work with companies hoping to appeal to millennials. “Society of Grownups has struck a chord that is relevant and important.”

Looking to fill that need, other “adulting” classes have cropped up around the country. In New York City, financial firm Stash Wealth teaches an occasional workshop called “ADULTING 101: The Last Class You Should Have Taken In School,” directed at 20- and 30-somethings who want to “get their [financial] shit together.” A public library in North Bend, Oregon, offers a course called “Adulting 101: Basic How-Tos for Ages 16-25.” And an organization actually called The Adulting School made headlines in February after opening to much fanfare in Maine. Its founders say they were inspired by the Society of Grownups.

That philosophy is part of what made the organization such a success in its first year. Lorenzo says one of the highlights of the Brookline building was how it fostered community among strangers. In one class, couples tentatively shared their approaches to managing joint checking accounts. In another, participants compared notes on paying off student loans. Lorenzo even remembers one student telling her he came to a class on a date. “It really blew my mind,” she says. “I think the class was about retirement planning.”

Things were going so well that in October 2015, MassMutual announced a $100 million investment in the Society of Grownups, and plans to open locations in 10 US cities. “Our classes and supper clubs are selling out, local businesses and universities are eager to partner with us, and our social media followers are asking when Society of Grownups is coming to their city,” then Society of Grownups CEO Nondini Naqui said in a press release at the time. “I am pleased to say this isn’t an experiment anymore.”

A year later, Naqui would be laid off with at least a third of the company’s 40-50 employees.

The Society declined to go into specifics on its about-face—it will not even confirm layoff numbers, noting only that “many of our current team members worked in the physical space”—but Lorenzo says that going online-only was a logical move. “Ultimately, we decided on flexibility to reach more people,” she says, describing the shift as part of the company’s mission statement to meet customers “where they’re at.”

For millennials, it would seem that “where” is online, as the success of websites like LearnVest and Mint suggests. Two-thirds of people ages 18-29 use online banking, according to a Pew study, compared with 47% for ages 65-plus. The First Data survey found that just under half of millennials prefer to communicate electronically at work, rather than face-to-face. Companies like Uber, Lyft, and Seamless have even stripped the human interaction out of mundane real-world transactions like ordering takeout or hailing a cab.

But Adamson cautions that a website alone does not always do the trick. “I don’t believe from the data that millennials see the world in silos—online or brick-and-mortar,” he says. “Most millennials today expect brands to exist whenever and wherever they want.” That might mean interacting with Apple online one day and at an Apple store the next, a hybrid approach that even digital stalwarts like Amazon are starting to adopt.

Lorenzo is hoping to recreate the intimacy of the Society’s IRL space in its virtual one, in part by incorporating social media, discussion boards, and interactive widgets. Last month, for example, the organization offered a tax-themed Twitter chat run by one of its financial planners. Remote one-on-one advising sessions were also discussed, although Lorenzo says the organization is focusing on new video courses for now.

Read next: America’s leading grown-ups are being brought in to reassure the class of 2017

“We definitely don’t want to let go of what made us successful to begin with,” she says. “It’s not so much about ‘physical or digital: If you pit them against each other, which one wins out?’ They both give a lot of value, depending on what you need.”