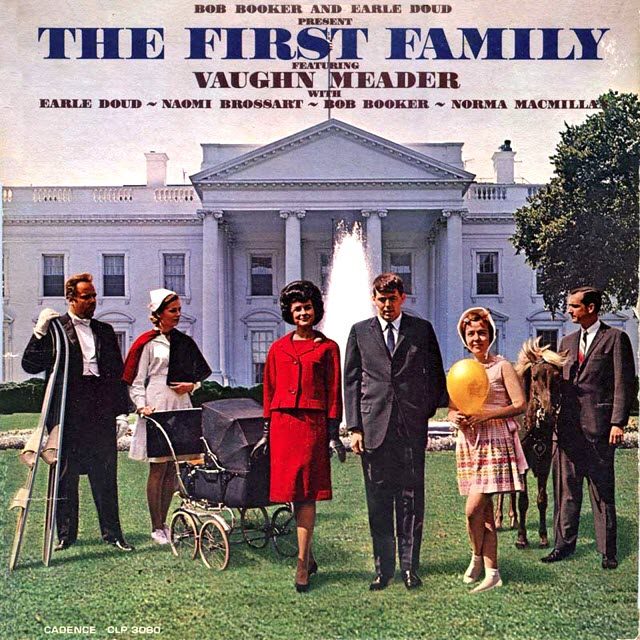 On November 22, 1963, when a Milwaukee cabbie picked up his passenger, the driver recognized 27-year-old Vaughn Meader of the wildly successful comedy album, The First Family. “Did you hear about Kennedy in Dallas?” asked the driver.

Meader, figuring it was a joke set-up, answered, “No, how does it go?”

Then he heard the world-changing news on the taxi’s radio.

Born in Maine in 1936, Meader moved around often before settling in Brookline, Mass. He finished Brookline High Scool in 1953 and joined the army shortly afterward. While stationed in Germany, Meader found an interest in music, and, with some fellow soldiers, formed a country-music band called the Rhine Rangers.

Back in the U.S., he became a piano-playing nightclub performer in Greenwich Village. When John F. Kennedy became president—and a national presence—Meader discovered his facility for crowd-pleasing JFK impersonations when he tossed out a few Kennedyesque lines onstage one night. Meader, who bore a passing resemblance to the young president, quickly mastered Kennedy’s gestures and facial expressions and moved onto the stand-up circuit with an amusing Kennedy-based shtick.

On October 22, 1962 (the same night as JFK’s historic Cuban missile-crisis speech),and before a live audience, Meader, three writer friends, and a small ensemble recorded The First Family. In the course of 17 skits, Meader offered spot-on sendups of both John and Robert Kennedy while Naomi Brossart provided the voice of Jackie. The Cadence Records disc poked good-natured fun at JFK’s PT-109 history, Kennedy athletics, White House kids, and even Jackie’s breathy description of her White House redecoration.

Released in November, in its first six weeks, The First Family racked up sales of 6.5 million discs—the fastest-selling LP in history at that time—and won the 1963 Grammy Album of the Year award. Meader became an overnight celebrity.

While Jackie Kennedy disliked her portrayl, JFK enjoyed much of the album and gave several copies as Christmas gifts that year. He even opened a Democratic National Convention dinner with the line, “Vaughn Meader was busy tonight, so I came myself.”

After the assassination, Cadence Records destroyed all unsold copies of The First Family to avoid being accused of “cashing in” on the president’s death. Meader never did another JFK impression and would sometimes refer to the Dallas tragedy as “the day I died.” He drifted around the country, unsuccessfully trying new routines before descending into depression and embracing a hazy world of booze and drugs.

He found God in the late 1960s and returned to Maine, where he managed a pub in the small town of Hallowell. To further distance himself from his once-famous past, he reclaimed his given first name of Abbott (Vaughn was his middle name).

Near the end of his life, Meader, a lifelong smoker, sold the movie rights to his story to pay his medical expenses for ongoing COPD treatments, though the movie was never made. On October 29, 2004, Vaughn Meader died in obscurity at age 68, a mere footnote in 1960s entertainment history.