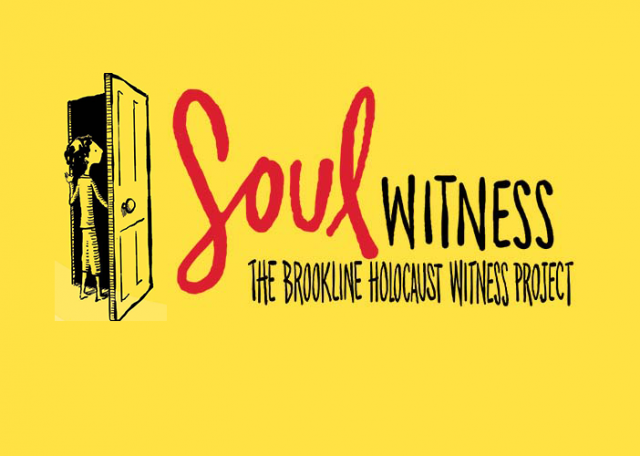 Sitting in a cabinet in a Brookline office, untouched for 20 years, was a stack of over 100 tapes containing 90 hours of testimonies from over 30 Holocaust survivors.

The only person who has watched them all is producer Harvey Bravman.

In 2014, Chief Diversity Officer Lloyd Gellineau asked Bravman if he would help create a Brookline movie using old tapes belonging to the Town. At first, Bravman thought the movie would be about Brookline, but when Gellineau showed him the tapes Bravman realized the project would be much different.

The tapes, which Gellineau discovered while cleaning his office, came from a project led by Brookliners Leon Saperstein and Regina Barshak who gathered the testimonies of Holocaust survivors living in Brookline.

“When he saw the liberation of Dachau [concentration camp], it changed his whole life,” said Bravman.

In the ’80s Satenstein teamed up with Barshak, a Holocaust survivor from France, to gather the testimonies and create a living memorial. According to Bravman, both Satenstein and Barshak recognized the great need not just to document the Holocaust but to address an even greater need: to listen to the survivors and really hear what they had to say.

“No one wanted to hear the details of what happened even if the person who experienced it had to say it,” said Bravman of the years after World War II.

The pair oversaw the project, which collected testimonies between 1990 and 1996 and involved several people including Holocaust expert Lawrence Langer, who helped conduct the testimony interviews, and Stephen Bressler who was the Brookline human relations director at the time. The project later stalled due to a lack of money and resources, leading to the tapes being stored for years until Gellineau discovered them.

The task set before Bravman in 2014 was daunting.

“It took me a week before I could watch the first one,” said Bravman. “I kept sitting down and couldn’t do it.”

Eventually, Bravman sat down and watched the first one, and the next one, and then the next, until he had seen all 90 hours. Then he had to log them and decide what to use and how to bring Satenstein and Barshak’s vision to life. The result is a 63-minute work-in-progress documentary, “Soul Witness,” The Brookline Holocaust Witness Project.

It is a film free of politics, Bravman said, that contains just enough context to help the audience, but the rest is left to the survivors and their testimonies.

“These testimonies, they’re committed to memory the first time you see them,” Bravman said.

Contained in those tapes, Bravman said, were some of the most “noble and epic thoughts” he had heard in his life.

One survivor – who owned a Brookline bakery – testified for seven hours; another talked about how she dug a hole in a forest and hid there for 18 months with her child, two other mothers and their two children. The stories, haunting and deeply personal and human, carried a common thread.

There is a reason why most people agree to be interviewed, Bravman said, and it is because they have something they would like to say. For many of the survivors who testified, the thing they had come to share was their love for their family members – many of whom, if not all, the speakers had lost.

“They’re living their lives for all the people they lost,” Bravman said. “The Holocaust doesn’t become about survival. It becomes about loss.”

Though he has been through the testimonies countless times, the testimonies still have a powerful effect on Bravman. Choking up, he recalled one testimony where the speaker, when asked how he survived the concentration camp, said he wanted to live because he did not want to cause his mother pain by dying.

For Gellineau, it is another testimony that stands out – from a man who though full of anger and wanting revenge, chose not to take it when he had the opportunity.

“That hit home for me,” said Gellinneau. “You can have all this anger, righteous anger, and you can have the capacity not necessarily to forgive but to move on from it.”

“There was something very heroic about giving the testimony,” said Bravman. “It’s like they had something they knew needed to be shared.”

Recognizing that, Bravman was protective of the speakers and particular in what he chose. He established two criteria in selecting videos for the movie, which were that the selected clip had to contain what the speaker had come to the interview to say, and that they had to be describing something they witnessed first-hand.

“I didn’t want anyone ever to question them,” said Bravman.

For those behind the film, like Bravman and Gellineau, the making of “Soul Witness” was essential not only for historical purposes but to help illustrate that crises of genocide, discrimination and displacement still happen around the world today.

“The purpose of the videos was to capture historically the stories of these individuals,” Gellineau said. “The second goal was things like this happen in our world and we need to be reminded of that.”

“Soul Witness” will screen at the Coolidge Corner Theatre on Jan. 25 for the third time since its creation. Though the 63-minute film is unchanged, there will be an additional seven-minute film included in the screening that previews other ongoing “Soul Witness” projects.

In addition to completing “Soul Witness,” Bravman hopes to create a documentary about the making of it and update the “Soul Witness” website here with videos and interviews with those involved in conducting the initial interviews in the ’90s.

It is clear the testimonies have changed Bravman’s life.

“I think it is really important that we put ourselves in other people’s shoes, even if that person has lived an experience we don’t want to hear,” said Bravman. “I think it’s healing to do it. This is going to be my whole life now.”

The film will screen at the Coolidge Corner Theatre on Jan. 25 at 7:00 p.m. Tickets can be purchased through the theatre’s website here.