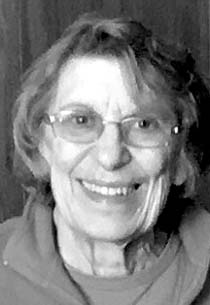 She was a beloved wife, mother, sister, aunt, and grandmother.

She was born in Philadelphia, PA, to Stuart H. and Lois A. O. Chapman. Sarah graduated from Windsor (VT) High School in 1953, and attended Principia College in Elsah, IL, for two years. After completing a one-year program at Katharine Gibbs School in Boston, she joined the U.S. Foreign Service and enjoyed 2½ years working at the U.S. Embassy in Tokyo, Japan, in the late 1950s. Her travels took her around the world, including stops in Iran, Egypt, Greece and France.

After returning to Boston, she worked at Harvard University and completed her AB degree in French literature at Radcliffe in 1964. She went on to employment in the translation department of The Christian Science Publishing Society, working on French, Japanese and Greek publications.

Sarah’s wish to become a wife and mother was fulfilled in 1966, when she married Conrad and embraced motherhood of his three children — Rae, Bill and Peter. In 1971, Sarah, Conrad, Peter, and infant daughter Sandra moved from Ohio to settle in Conrad’s hometown of Fryeburg. Sarah volunteered in the community through extensive involvement with her church, helping in schools, and leading a Girl Scout troop. Professionally, she was a Christian Science practitioner and she also worked in various capacities for The First Church of Christ, Scientist in Boston over four decades.

Sarah had a generous, inquisitive, adventurous spirit and she loved spending time with family, gardening, learning, traveling, cooking, and serving others through church work. She was widely-known in town for her friendly smile, delicious pies and bountiful garden. She enjoyed intellectual challenges and was tenacious in researching solutions, be they for a computer problem, an organic way to keep damaging pests away from her blueberries, or the most energy-efficient electrical and heating systems for her home. Sarah’s travels later included cross-country train and road trips, month-long language programs in Mexico, a family wedding in India, and journeys to Alaska, Canada and Hawaii. She dearly loved her family and community and will be remembered for her generosity, integrity, curiosity and thoughtfulness.

She was predeceased by her husband, Conrad K. Eastman; and a brother, James W. Chapman.

Friends and neighbors are invited to join family for a celebration of Sarah’s life at her home on Saturday, August 5, 2017 at 4:00 p.m.