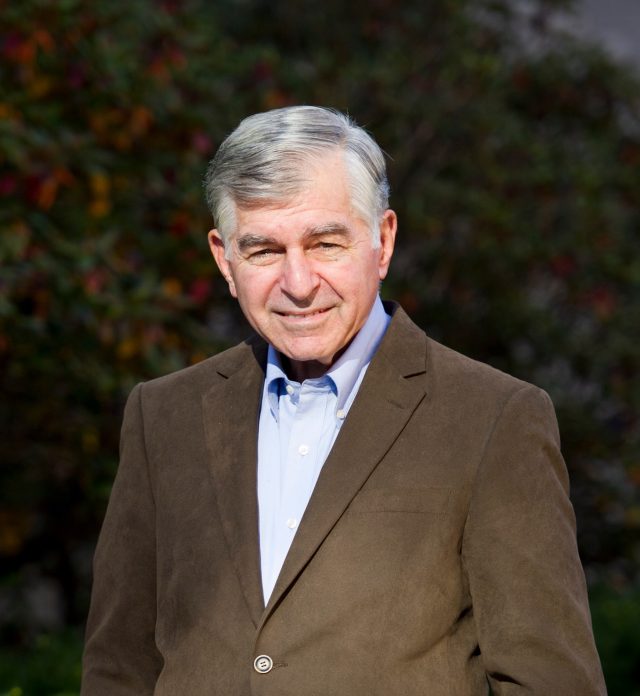 A small crowd of maybe 100 people gathered under yellow tents Tuesday afternoon as temperatures reached the upper 90s at the Riverway Park to celebrate former Gov. Michael Dukakis and his wife Kitty for their conservation work, particularly in Brookline.

“It is with deep appreciation of their commitment to the Olmsted Legacy in Massachusetts; with gratitude for their contributions to the protection, preservation and restoration of the Emerald Necklace; and in honor of their lifelong stewardship of our parks and open space that Riverway Park in Brookline, Massachusetts is dedicated to the Honorable Michael and Kitty Dukakis,” reads the stone plaque.

The recognition came out of a Town Meeting resolution to find a way to recognize the many accomplishments of this couple, said Director of Parks and Open Spaces Erin Gallentine.

Town Meeting decided to establish a Selectmen’s Committee “the Dukakis Recognition Committee” to find appropriate way to celebrate their accomplishments, that was led by then-Selectmen Jesse Mermell along with five others.

The met a number of times and discussed various spots including, inside town hall, outside of town hall, schools and the parks and ultimately someone recommended Riverway Park.

“It’s close to the home where they raised three children and still live today; it’s one of six parks that make up the Emerald Necklace; and under his administration as governor, he championed a $17 million bond bill to restore Olmsted parks across the commonwealth and it really helped revitalize the whole urban park movement,” said Gallentine.

And most importantly it is part of the former governor’s daily walk to Northeastern University where he teaches. Dukakis is known to walk, bag in hand picking up trash on his way and Kitty is often seen walking their as well.

“Everyone associates them with Riverway Park. So Parks and Rec voted as that being an appropriate tribute and voted to dedicate Riverway Park,” said Gallentine.

“It was a lovely afternoon and a wonderful tribute to an incredibly deserving couple. The governor and Kitty Dukakis have long understood the importance of Fredrick Law Olmsted’s system and the significance it has for democracy today. So looking at their many accomplishments it is really fitting to recognize them in this place where it all comes together,” she said.

The area is close to the Longwood T stop, and the Parks and Open Spaces division did all of the landscaping, which takes from the same plant palate as Frederick Law Olmsted’s original designs, and masonry work on the granite plaque. Each day as they were out working on it, they’d see Dukakis and sometimes jokingly ask him if he wanted to take a peek at their progress (he waited til the ceremony).

All of the work was funded privately. The entire event, including the installation was all paid for with private funding, according to Gallentine.