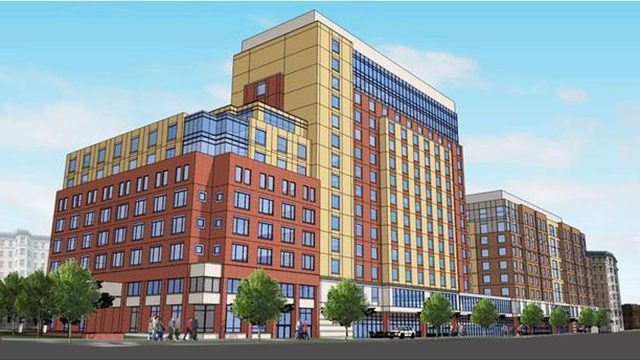 The Fallon Corporation’s proposal to redevelop the Holiday Inn site (1200 Beacon Street) is an important opportunity for Brookline. The Fallon plan would replace a long, drab building that is a detriment to Beacon Street. The current building has no setback and only minimal interface with the sidewalk. In its place, Fallon is proposing a mixed-use project. The project would provide new condo units that will appeal to empty nesters, restaurants and a modest expansion of the existing hotel. The new building would be attractively designed so that it is an asset to Beacon Street. The project would revitalize the streetscape between the St. Mary’s and Coolidge Corner. New residents would walk to both nearby commercial areas. The new restaurants in the developments would attract pedestrians from the surrounding area.

The proposal has stimulated vigorous opposition especially from residents of Parkman Street, immediately north of the site. The height of the proposed residential building is the major complaint. The proposed residential building will be comparable in height to the neighboring medical office building to the East. Critics also complain that the project would detract from the residential quality of Beacon Street between the St. Mary’s and Coolidge Corner shopping areas.

The proposal is most important because of its implications for Beacon Street. Thanks to bold development efforts late in the 19th century, Beacon Street became the spine of North Brookline. Henry Whitney, a real estate developer who lived near Coolidge Corner and owned a great deal of land along Beacon Street, saw promise in building a street railroad that would link downtown Boston with Coolidge Corner. The street railroad was seen as a way of relieving congestion in downtown Boston and improving access to Boston for Brookline residents. Brookline officials engaged Frederick Olmsted to design Beacon Street as a grand boulevard with dedicated trolley tracks

Residential buildings approaching 10 stories have long-standing precedence in the Beacon Street corridor. The first were built late in the 19th century. At the outset, proximity to the trolley was of vital importance in demand for housing in the corridor. The most recent were completed in the 1980s.

Commercial development in the corridor owes a good deal to its high residential density. Residents who live within walking distance of business provide an important customer base.

Mixed-land use in the Beacon Street corridor between St. Mary’s and Coolidge Corner is also well established. The sector includes the Temple Ohabei Shalom, two medical office buildings, the Holiday Inn, and a restaurant on the first floor of an apartment building.

Contemporary priorities make redevelopment of the Holiday Inn site particularly attractive. Our concerns about the need for energy conservation encourage us to live closer to our work places or along mass transit routes so that we expend less energy on transportation. Younger generations have greater appreciation for urban amenities than their parents. They also have less interest in automobiles and increased appreciation for walkability, that is, the ability to reach desired destinations on foot.

Further, Boston has solidified its position nationally and internationally as an excellent place to live and work. The result of these forces is a substantial increase in demand for urban housing in and near Boston. It is no surprise that the demand for housing in Boston has come to the Beacon Street corridor because of its proximity to Boston, the Green Line, its attractive commercial districts, its solid housing stock, its walkability and the elegance of the streetscape. Much has been made of Brookline’s attractiveness to young families because of the town’s schools. Housing in the Beacon Street corridor is also highly attractive to unmarried young professionals and to empty nesters.

Brookline residents with an interest in the vitality of Beacon Street need to participate in the public process surrounding the redevelopment proposal. The Coolidge Corner Study Committee is communicating with the developer in hopes of fashioning a proposal that Town meeting will support. The committee will hold its next meeting at 7:00 p.m. Sept. 7 at Town Hall.