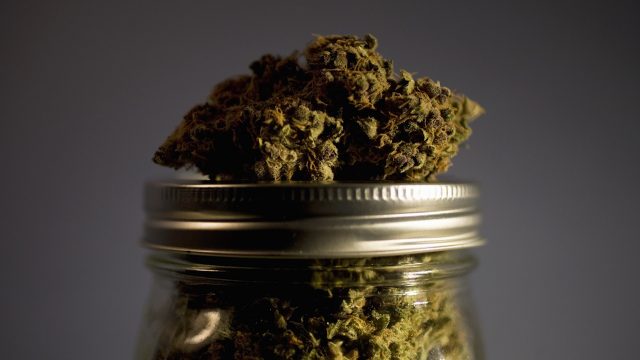 Cannabis entrepreneurs are working to find a place in the Massachusetts market, sometimes treading on legally dubious ground.

From a meet-up website that connects pot smokers with homegrowers to a startup that delivers $55 bottles of fruit juice with a “free gift” of marijuana, some are basing small cannabis businesses on a provision in the state law that allows people to exchange gifts of up to an ounce of weed. Other enterprises with larger corporate backings are planning to enter the legal marijuana market through state-regulated channels to offer new types of pot products.

Following the passage of a ballot question, marijuana became legal for recreational purposes in Massachusetts in December 2016. While it is legal to grow and possess limited quantities of pot, there is still no legal way to buy it. The state Cannabis Control Commission is currently developing the regulatory framework for legal sales. The first licensed commercial marijuana dispensaries in Massachusetts are expected to open in July.

“It’s the elephant in the room in states that are coming online; the states say it’s legal, but there’s no way to access it,” said Oregon resident Will Gaudet, co-founder and CEO of HarvestPlug, a web-based platform where pot growers and smokers can arrange transactions. “In legal states, the black market is still thriving. Something is wrong with the way we’re coming online in legal states. We have to quit controlling cannabis like it’s uranium.”

On HarvestPlug, which operates under the slogan “Weed is free; Time is money,” users can post if they are seeking or making available specific strains of pot in a particular geographic area. Gaudet argues that the platform, which opened to Massachusetts residents last month, is legal because growers are paid for their time, not for the “free” marijuana they exchange.

The issue: Marijuana possession has been legal in Massachusetts for a year, but itis still not legal to buy or sell the drug.

The impact: Some are seeking legally dubious ways to enter the cannabis market.

Massachusetts law enforcement officials, however, have a different opinion of such exchanges.

Felix Browne, a spokesman for the Executive Office of Public Safety, cautioned that ”sham transactions” involving the exchange of marijuana and disguised payments or reciprocal gifts remain against the law. He pointed to guidance the office issued to district attorneys and police chiefs in late 2016 and early 2017.

In a memo issued in February, EOPS Chief Legal Counsel David Solet advised prosecutors that there are “a number of individuals and businesses that are attempting to evade the Commonwealth’s prohibition on the unlicensed sale of marijuana by engaging in organized sham transactions.”

That advisory specifically referenced HighSpeed, a service that delivers fruit juice for $55 or more per bottle, with an accompanying “free” gift of pot. “Obviously, this is a thinly concealed scheme to obscure the illegal sale of marijuana by an unlicensed seller,” Solet’s memo stated. Despite the legal scrutiny, however, HighSpeed was still operating in Massachusetts as of late December.

Gaudet said he hopes to disrupt the emerging commercial pot industry the same way AirBnB and Uber have upended the hotel and taxi industries, shifting commercial power from large corporations and toward small entrepreneurs.

“Legal cannabis is not working for everyone,” he said. “We want to offer a way we can embrace the black market and maybe put a tax on the point of sale between peers, or create a license for people who want to home-grow and sell among peers.”

When marijuana sales become legal in Massachusetts, consumers will likely be able to choose from a wide variety of products that go far beyond smokable cannabis. Edibles, tinctures, oils and other products are expected to be stocked in state-licensed marijuana dispensaries.

In California, Rebel Coast Winery recently announced a new line of cannabis-infused, non-alcoholic wine. The federal prohibition on marijuana prevents the transport of marijuana products across state lines, so Rebel Coast does not plan to ship its product to Massachusetts or other states anytime soon. But producing cannabis wine is something that could potentially be duplicated in Massachusetts and other states that have moved to legalize marijuana.

“It likely would take a change at the federal level for that to change,” Rebel Coast COO Alex Howe said. “One would have to set up shop in each new state (in which) they’d like to do business.”

A Colorado-based company that makes marijuana inhalers has its eyes on Massachusetts. Similar in appearance to an asthma inhaler, the Aeroinhaler delivers a measured dose of cannabis concentrates without smoke, vapor or odors.

“We want to make the Aeroinhaler available in any state that allows people of legal age to consume cannabis,” said Chris Hardiman, CEO of Revered Inc., which manufactures the inhaler. “We would be required to establish manufacturing or align with a manufacturing parent in every state we wish to distribute.”

The company, Hardiman said, is currently finalizing agreements to expand to Washington, Oregon, California, Nevada and Ohio. Expansion to Massachusetts is a goal.