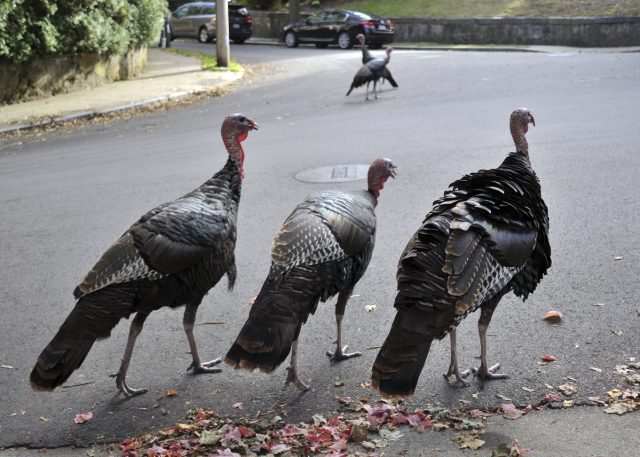 Not everyone is celebrating the return of the wild turkeys.

After being wiped out from New England in the 1800s, the birds have stormed back in what is considered a major success story for wildlife restoration. But as they spread farther into urban areas, they are increasingly clashing with residents who say they destroy gardens, damage cars, chase pets and attack people.

Complaints about troublesome turkeys have surged in Boston and its suburbs over the past three years, causing headaches for police and health officials called to handle problems, according to city and town records provided to The Associated Press. It is a familiar dilemma for some other U.S. towns from coast to coast that have been overrun by turkeys in recent years.

Boston city officials say they received at least 60 complaints last year, a threefold increase over the year before. Nearby Somerville, Belmont and Brookline have seen similar upticks, combining for a total of 137 turkey gripes since the start of last year.

“Several years ago it was more of an isolated situation here and there,” said David Scarpitti, the wild turkey and upland game biologist for the Massachusetts Division of Fisheries and Wildlife. “Now it’s starting to spread into communities all around Boston.”

Often the grievance is little more than a wayward turkey blocking traffic, but in at least five cases turkeys became so aggressive that police said they had to shoot them as a matter of public safety. Some area residents have suffered minor injuries from the birds, including a 72-year-old woman who told police she was bruised in August after a gang of turkeys scratched and pecked her during a walk.

Turkeys in the wild are far stronger and faster than the ones that land on Thanksgiving tables, experts say. Males in particular are driven to show physical aggression as a way to climb the social pecking order, and they sometimes view humans as potential competitors.

“Turkeys don’t really mean to harm people — it’s just tied to their social dynamics within the flock,” Scarpitti said. “They lose perspective that humans are humans and turkeys are turkeys. They just want to assert dominance over anything.”

Even the earliest Americans picked up on that characteristic, with Ben Franklin famously writing that the turkey is a “Bird of Courage, and would not hesitate to attack a Grenadier of the British Guards who should presume to invade his Farm Yard with a red Coat on.”

In the town of Brookline, Tess Bundy has come to loathe the turkeys that roost behind her home and often come charging when she leaves. She called police in April after a big tom repeatedly launched itself at her and her infant daughter, backing down only after Bundy whacked it several times with a shovel.

“They’re terrible. Every year they’re worse,” said Bundy, a history professor at Merrimack College. “I really do think that they’re a menace to the town.”

The complaints have sent some cities searching for answers, including in Cambridge, where the city council says it is working on a plan. Officials in Brookline issued new guidance for fowl encounters in August, telling residents to “step toward the turkey and act confidently.”

Wildlife experts say much of the problem can be blamed on residents who leave out food for turkeys, which entices flocks to settle in and helps them survive winters.

Towns with similar problems in New Jersey, Iowa and Oregon have banned turkey feeding in recent years, and Montana enacted a similar statewide ban in May. But the idea has not spread to the Boston area, where some residents say they enjoy the return of native wildlife.

Not far from two sites where turkeys were shot by police, Brookline resident Suzette Abbott says she’s had no problems with the turkeys that roam her block.

“I don’t think they’re dangerous,” Abbott said. “In the spring they look pretty amazing when the males are displaying their colors. I think they’re quite beautiful if you actually look at their feathers.”