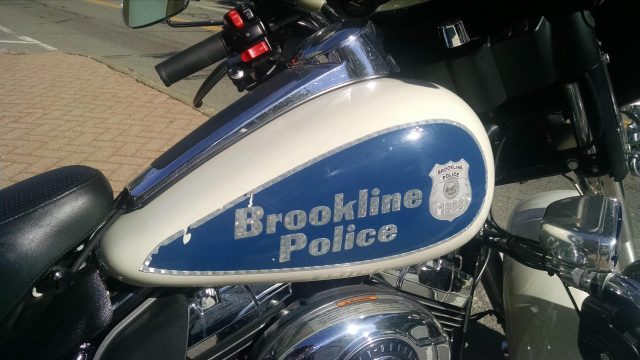 All of the following is from Brookline Police log or online blog. They are excerpts taken from the public police log and represent a portion of what kinds of calls the police respond to. All suspects are considered innocent until proven guilty in a court of law.

Nurses aid forges checks: Someone on Heath Street called to report a nurses aid who had forged a number of checks. An investigation was conducted and one person will be summonsed into court for Larceny from a Building. (Patch will follow up on this one).

Fell asleep: Officers responded to the intersection of Boylston and Warren streets for a crash. The driver reported falling asleep while driving, she was issued a ticket for Marked Lanes Violation.

Stolen bike: Two Marion Street residents came into the station to report that their bike had been stolen from their home. The bike is described as a blue Giant with a medium men’s frame.

It was the lens’ fault: Someone reported a crash on Washington Street. There were no injuries. Police determined that one of the operators was distracted when the lens fell out of their glasses, which ultimately led to the crash.

Hazmat: Dispatch received several calls from park patrons reporting there was a strong chemical odor coming from inside a park building at Larz Anderson. Officers created a 2/10 mile perimeter (roughly 1,000 feet) surrounding the ice rink. The fire department deemed it necessary to evacuate any civilians inside and prohibit entry into the park. Police and Fire established a command post and units were strategically placed blocking entrances to the park and assisted with evacuation. The Brookline Fire Department concluded the ammonia detection alarm system malfunctioned, causing a severe leak and safety hazard. The leak was repaired, and the park was reopened.

Found: At approximately 5 p.m. a woman came into the Brookline Police Station to drop off some found property that was abandoned at the bus stop located on Harvard St in Coolidge Corner. Attempts have been made to contact the owner.

Drunk Driving: Officers responded to a radio call for Erratic Operation at the intersection of Washington and Greenough streets. After police found the car, officers placed the driver under arrest and charged her with driving under influence of liquor, driving on a suspended licence, driving on a revoked registration, and driving an unregistered car, in addition to marked lanes violation.

Tampered: Officers responded to an address on Beacon Street to take a report of past malicious damage to property. A staff member informed of the building told police that the card reader to the exterior door had been tampered with sometime between in the past two days.