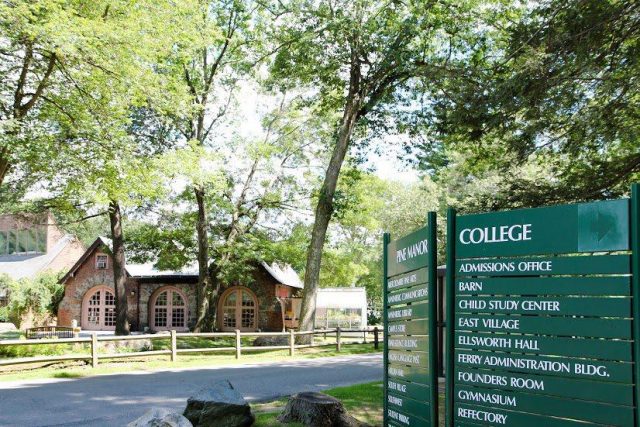 Pine Manor College, a small liberal arts college in Brookline that serves a significant number of low-income students, was removed from academic probation last week by the regional accrediting agency, the college and agency said Monday.

The college, under new president Tom O’Reilly, worked over the past year to improve the school’s academic programs and finances to show accreditors that is on a path to stability.

“We are succeeding on all fronts,” O’Reilly said Monday.

Meanwhile, some officials in Brookline have proposed a plan to seize part of the school’s campus by eminent domain in order to build an elementary school. Town officials have cited the school’s probationary status as an argument for taking the land.

Town officials are in the midst of conducting a study of possible locations for a ninth elementary school. Pine Manor remains an option.

Accreditation is important for a college because without it a school becomes ineligible to receive federal financial aid, which means students who attend cannot access student loans or grants.

A college can be placed on probation for failing to meet any one of the accrediting agency’s 11 standards. Pine Manor was on probation for not meeting five benchmarks: mission and purposes, planning and evaluation, organization and governance, students, and financial resources, according to the New England Association of Schools and Colleges.

In a press release Monday, O’Reilly said the school has improved its graduation rate, boosted its enrollment, and generated operating surpluses. The sports teams won championships in basketball and soccer and alumni fund-raising has increased, he said.

The student body at Pine Manor is 85 percent students of color and also has high numbers of low-income and first-generation students, he said.

“We are serving an incredibly important group of young people and we are succeeding,’’ O’Reilly said.

Although its accreditation has been restored, the college will be monitored over the next year, according to Barbara Brittingham, the president of the Commission on Institutions of Higher Education at NEASC, which accredits schools in this region.

Pine Manor had also been placed on probation in 2011 and came off probation two years later.