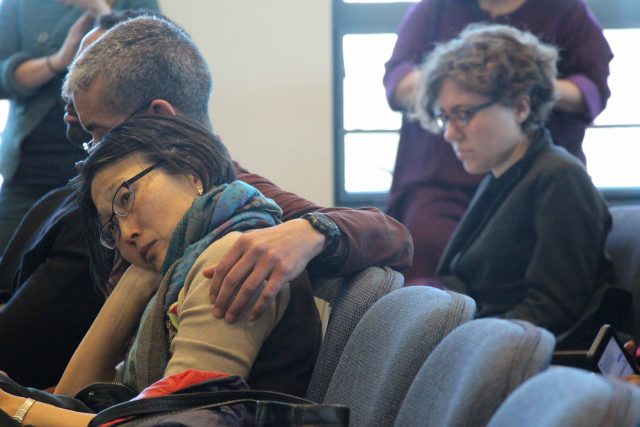 Police officers Prentice Pilot and Estifanos Zerai-Misgun’s disciplinary hearing for potential termination due to absence from their jobs at the Brookline Police Department occurred on March 3.

The officers have not returned to work since reporting alleged racial discrimination in December 2015. According to Oren M. Sellstrom and Hillary Schwab, the lawyers representing the officers, the Town has taken no meaningful action to remedy the situation.

The allegations from the officers (listed in a letter November 2016 from Sellstrom and Schwab that was presented at the hearing) include that the officers do not feel safe returning to work due to the threatening nature of comments they received, the officers are scared their fellow officers won’t back them up, the Town has ridiculed the officers’ concerns by using quotation marks around the word unsafe, the Town called the racist comments “racial bantering” and the Town dismissed the offensive and harmful nature of the remarks, thereby ignoring the problem.

The Town seeks to terminate the two officers of color, who make up one-third of the department’s six Black police officers. The presiding hearing officer James Lampke, who will decide the case, is the same hearing officer who heard fireman Gerald Alston’s case in October 2016. In Alston’s case, similar racial harassment allegations led to a leave of absence of many years, which culminated in

Alston’s firing. Lampke may not return a verdict for months.

During the opening statements, Selectmen’s attorney Joseph Padolsky said that the number of people present to support the two officers at the meeting showed that they are part of a movement, one that at its core hopes to end racism and spread a message of peace, not prosecution.