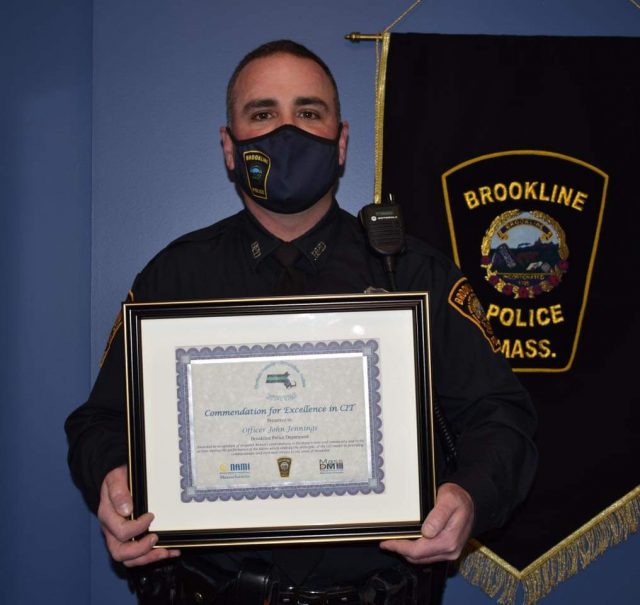 Please join us in congratulating Officer John Jennings on receiving our Department’s first ever Commendation for Excellence in CIT.

Officer John Jennings conducts himself in a manner that exemplifies the principles of Crisis Intervention Training.

His calm demeanor and willingness to go above and beyond his assigned duties greatly benefit the Brookline Police Department and the Brookline community.

Officer Jennings is equally adept at working with individuals in acute crisis as well as vulnerable members of the Brookline community who are living with ongoing challenges. He regularly works with adults, children and families living with mental health concerns, substance misuse disorders and developmental challenges.

His coworkers are not the only ones who have taken notice, and a local Brookline mother shared her thoughts on Officer Jennings:

“When we think of Officer John Jennings, the word humanitarian comes to mind. What is a humanitarian? The definition that resonates with us is “A person who is focused on protecting human lives and preserving human dignity.” This is exactly who Officer Jennings is. He cares about the welfare of others, he is selfless, genuine and takes his job very seriously.

“When we joined the crisis intervention team a few years ago, we had no idea that they would become part of our extended family and become such an intricate part of our daily lives.

“My son was introduced to Officer Jennings over two years ago and since then, the two have been inseparable. Officer John is “his person.” My son calls him when he is happy, sad, frustrated and literally on the brink of losing it. Officer Jennings is always there to support him, listen to him and help him calm down, on OR off duty. We have avoided numerous hospitalizations and time spent away from school, because of Officer Jennings. He possesses strong de-escalation skills and is able to immediately calm my son, help him to reflect on the situation and move forward.

“Mental & Behavioral health are in the forefront of the challenges being faced by our population. It is beyond comforting, to reside in a community, where we have such an elite police force who embraces our loved ones and ensures that its officers are CIT trained, which is crucial in deescalating behavioral outbursts.

“Officer Jennings is an example for all. We could not think of anyone more deserving of this award.”

Officer Jennings’ calm and measured response to various incidents increase the likelihood of a positive outcome. He routinely takes the initiative to check in on the people he encounters and regularly works with the department clinician, school officers and community service to assist individuals and families connect with services. His efforts have led to him establishing relationships with many of the individuals and families he works with.

Officer Jennings does an exemplary job in an area of police work that is often overlooked and seldom recognized. He does so in a professional, compassionate and humble manner.

Congratulations Officer John Jennings and be on the lookout for award winners being announced in neighboring jurisdictions near you.