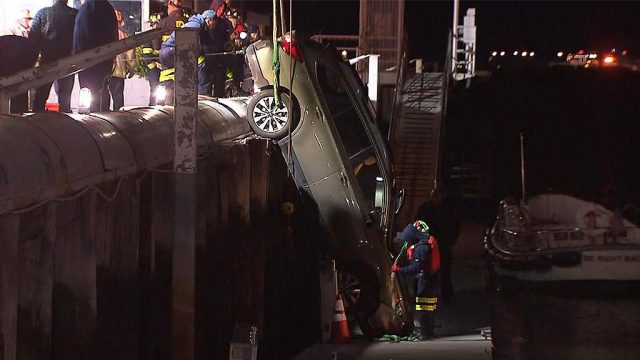 An off-duty Brookline firefighter who happened to be in the right place at the right time is being credited with saving a couple’s life after their car plunged off a pier in Charlestown on Wednesday night.

Brian Mulkern was at the Pier 6 restaurant before attending his class at Bunker Hill Community College when he heard a bang and spotted a vehicle teetering on the edge of the pier.

“I heard a big bang and then I heard some people yell for help,” he said.

Mulkern said he was able to flag down bystanders to secure the car, which was resting nose down on a dock, while he called 911.

“My big concern, as far as life safety, was if the car was to slide out, it would have ended up in the water,” he said.

Mulkern then swooped in and pulled a man and woman to safety.

“The tough part with him was how he was positioned. I kind of had to grab under the car a little, use the steering wheel as my balance point, ease him out and slide him down,” he said. “There was another civilian luckily there to shift him because I was kind of hanging over the water.”

The driver hit the wrong pedal while parking at the restaurant and the car lurched forward over a wall.

“They were the heroes,” the driver told the media. “They came down instantly and saved us.”

Mulkern, who is studying nursing in addition to being a firefighter, said he did not think twice about jumping into action.

“We do a lot of training with this kind of stuff,” he said. “It helps you to be calm in the situation. I couldn’t have done it by myself.”

The couple was not injured and went inside for dinner following the incident.

The Most Widespread Traditions In Ireland And Where They Come From

Town Of Brookline Recognized In Fortune’s 25 Best Places To Live...