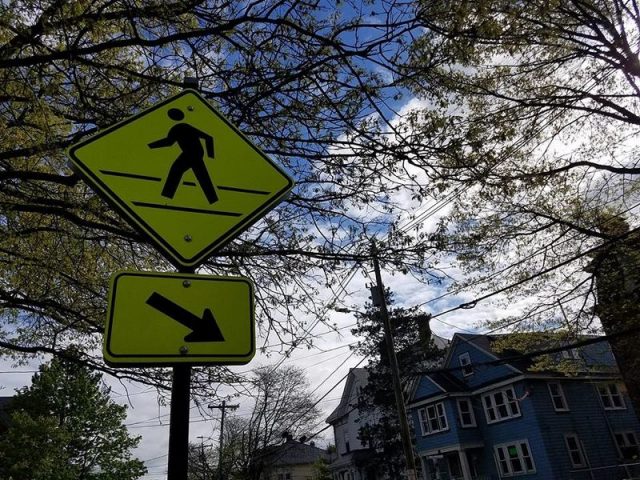 At 7:30 a.m. she pulled up in her little silver car, parked on Waverly Street and walked down to the corner where Waverly meets Cypress and Stanton Road. Decked out in an orange and yellow safety vest and several layers Thursday morning she marched up to the intersection looked both ways and stepped back a few feet indicating to the cars she was not crossing – just yet. But between 7:30 and 8:00 a.m. Ruthann Sneider, a town meeting member, and a self proclaimed grandmother activist will help almost 100 people cross the street on their way to school.

The process has been ongoing for about a month. There have been efforts to talk to leadership at the local school, the police department, the department of public works. Seeing how slow bureaucracy – even in Brookline – can be, Sneider said she decided to take a page out of the late Frank Farlow’s playbook. 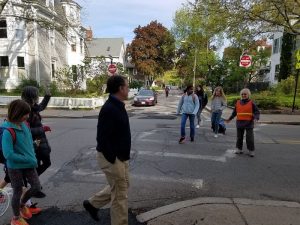 “Years and years ago, when Frank Farlow was my town meeting member and I had had no success in getting the park and recreation department to oil a really noisy swing in the park behind my house, I complained to Frank, who came over and oiled it himself,” she remembers.

Thursday was the fourth morning Sneider has called upon her training as former elementary School teacher on a field trip and stepped out into traffic, arms raised as children – some of them about her height – walk safely past her to the other side.

“I like to say ‘welcome to the other side of the street,'” she joked as the children and their parents thank her and head along their way.

They come in trickles at first. Sneider seeing them coming, steps to the edge of the sidewalk and leans forward on her toes to yell “are you crossing here?” A girl wearing all black and pulling a rolling backpack shakes her head, thanking her, but continued along Cypress. Two other girls coming up next nod and Sneider holds her hand out to indicate to the cars to stop.

There are two ways to get to the Pierce School from that intersection, Sneider explains. Some turn and walk along Cypress to School Street and head in there, others walk down Waverly and up to Washington Street before passing in front of Town Hall. There are designated crossing guards at the intersection of Cypress, Washington and School as well as a crossing guard on Washington Street near the Police and Fire Station. 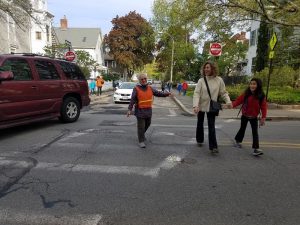 Until the past week, anyone attempting to cross Cypress near the Waverly/Stanton intersection has had to eyeball the traffic and hope for the best. Sure, there are signs indicating the pedestrian crossing, but the cross walk is faded and you never can tell what a driver will do.

“Before she was here, I’d throw myself into the traffic and they’d screech to a halt,” said Ethan Treistman a father who walks his three children to the Pierce School every day. Or not. He said that on at least one occasion he had had to jump out of the way for a car, while he was in the cross walk. “It’s a tough intersection,” he said.

His children agree. “It’s just hard to cross. Cars just don’t see us,” said Danny, 11, and Lillian, 7, added “No one stops when we try to cross.” So what do they think about Sneider’s efforts? “I like it,” summed up Sammy, 8. And his brother and sister nod.

Jean Kane, whose husband made the initial inquiry, said she’s all for Sneider’s efforts. “I think it’s awesome. It’s about recognizing a possible solution that doesn’t need a feasibility study in order to be fixed.”

She has been wanting to teach her fourth grader more about independence, and perhaps let her child head to school solo, but that crosswalk isn’t helping. And it’s not just that intersection of Cypress that could use some help. 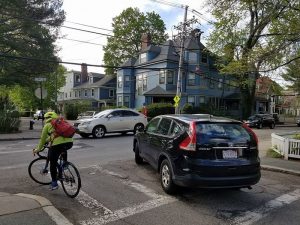 Kane points out that many parents use the CVS parking lot to drop off children, but then seem to forget that there are pedestrians nearby, making the sidewalk there a dangerous spot as cars come and go.

Some estimates on a traffic calming study put any changes at nine months away between the time it takes to get a design change and implementation depending on the complexity of a solution there. Add to that the fact that the transportation division is already stretched thin with other business and it could take a while.

The speed limit there is 25 and drivers are mostly respectful, said Sneider. “But once in a while someone will just speed through here to get to the next red light,” she said, adding she committed to crossing children there (“I let the adults fend for themselves,” she jokes) each morning until there is a solution.